Why Cappadocia Needs To Be On Your 2018 Bucket List

It’s 5am and we’re standing in a dark valley in Cappadocia. Severely jetlagged and shivering from the cold, our group of pan-Asian journalists can barely keep our eyes open, let alone see what’s in front of us ... but no one’s complaining. Huddled around, cameras at the ready, we wait in anticipation as our hot-air balloon gets inflated.

Our eyes gradually adjust and the silhouettes of a dozen other hot-air balloons start to appear around us—their bulbous shadows blending seamlessly into the distant skyline of Cappadocia’s famed cave homes and fairy chimneys. The result of millions of years of natural erosion, this otherworldly Anatolian landscape is what makes a hot-air balloon ride over Cappadocia such a coveted bucket list item.

The area (Göreme National Park and its surrounding rock sites) is a UNESCO world heritage site not just for its spectacular landscape, but for some of the world's largest (and oldest) cave-dwelling complexes dating as far back as 1200 BC.

With our balloon now the size of a small house, the Deluxe Balloons crew fires hot air into its mouth with a giant burner, causing it to rise. A few minutes later, they pull the basket upright and shout that it's ready to board. One by one, we climb in, making sure we distribute our weight evenly across both sides. About 12 of us can fit in here snugly (less premium flights can take up to 20), and as part of the safety briefing, we’re told to grab the ropes along the inside of the basket should there be a bumpy landing.

See also: 10 Most Instagrammable Spots In The World

Our pilot is a young-looking Turkish man with a goatee—armed with a walkie-talkie in one hand to communicate with air traffic control and the burner in the other—his hand pressing the lever every few seconds to shoot a roaring flame upwards. The intense heat of the burner warms us up from beneath, and as the pilot keeps the flame going, the ground crew let go and we find ourselves drifting off the ground in what must be the smoothest take-off ever, floating higher and higher into the sky, just as the sun’s started to rise. With up to 100 colourful balloons taking flight each morning—each of them flickering like mini-lanterns—the view of Cappadocia from above is truly breathtaking. Besides the clicking of camera shutters, sporadic walkie-talkie static and the occasional roar of the burner, not a sound can be heard as we take in the sights with all of our senses. For the next hour, we go wherever the wind takes us—the balloon spinning ever so slightly to give everyone a chance to get their money shots. One minute, we’re floating high above the fairy chimneys to see Mount Argaeus in the horizon; the next, we’re hovering mere metres from the ground, holding our breaths that we don’t collide with anything. Our pilot expertly navigates us through the rugged landscape, and when it’s finally time to descend, the ground crew is ready and waiting. As we approach, they grab onto ropes attached to our basket and help us land squarely on the back of their truck, with zero impact at all. By now, the sun’s out and there’s a golden glow across the valley. As we’re helped out of the basket—beaming from ear to ear—we celebrate with a glass of champagne, a commemorative flight certificate from the pilot, and cheers to another thing off the bucket (or basket) list done.

Come along for the ride in the video below:

Cappadocia is a quick, 90-minute flight from Istanbul Atatürk Airport, and Turkish Airlines operates several direct flights per day. You'll land at Kayseri Erkilet International Airport, and from there, it’s about an hour’s drive to the centre of Cappadocia.

Getting to Istanbul from Asia's major cities like Hong Kong is a breeze—just hop on a direct Turkish Airlines flight and you’re there in under 12 hours. Flying business class offers a myriad of benefits, including extended leg room with customisable lay-flat seats, delicious dining onboard with a dedicated Skychef and access to their airport lounge in Istanbul (a serious contender for being the best airport lounge in the world).

See also: What You Need To See In Istanbul

When in Cappadocia, live like the locals and stay in one of the many cave hotels and suites in town. One of the very best is Ariana Sustainable Luxury Lodge, an intimate boutique hotel on top of the Uchisar Valley. With just 11 suites onsite, each with its own name, Ariana Lodge was designed for discerning luxury travellers looking for that unique experience. Each incredibly cosy suite features a gas fireplace, colourful Turkish carpets, plush beds and 100 percent Egyptian cotton sheets with an impressive 500 thread count.

Several suites have outdoor balconies that overlook the Uchisar Valley, but those without them can get the same view from Ariana Lodge’s sun terrace. Located just outside the hotel’s Plum Restaurant, it’s the perfect place to watch the sunrise (along with all the hot-air balloons) and sunset. One of our favourite things about Ariana Lodge was the fantastic food served at Plum Restaurant, including an amazing daily breakfast spread of Turkish breads, olives and cheese paired with Western favourites like smoothies, muesli and egg dishes. Lunch and dinner are equally impressive, where chef Volkan serves up traditional yet modern Turkish dishes with flair (many ingredients come from Ariana Lodge’s very own herb garden outside of the restaurant—and did we mention the organic vineyards?) With a stunning onyx-floored lobby, beautiful design elements and warm, attentive staff, this Small Luxury Hotels Of The World (SLH) property delivers on all fronts for a truly memorable stay. Widely considered the first place you should visit in Cappadocia, the Goreme Open Air Museum has some of the earliest known churches in history, dating back to the 10th to 12th centuries. This is one of the first places that word of Christianity spread, so don't miss your chance to see the cave churches, their ancient Byzantine frescoes, and what the locals call “pigeon homes” (little holes on the outside of rocks where villagers collected pigeon stool for fertiliser). 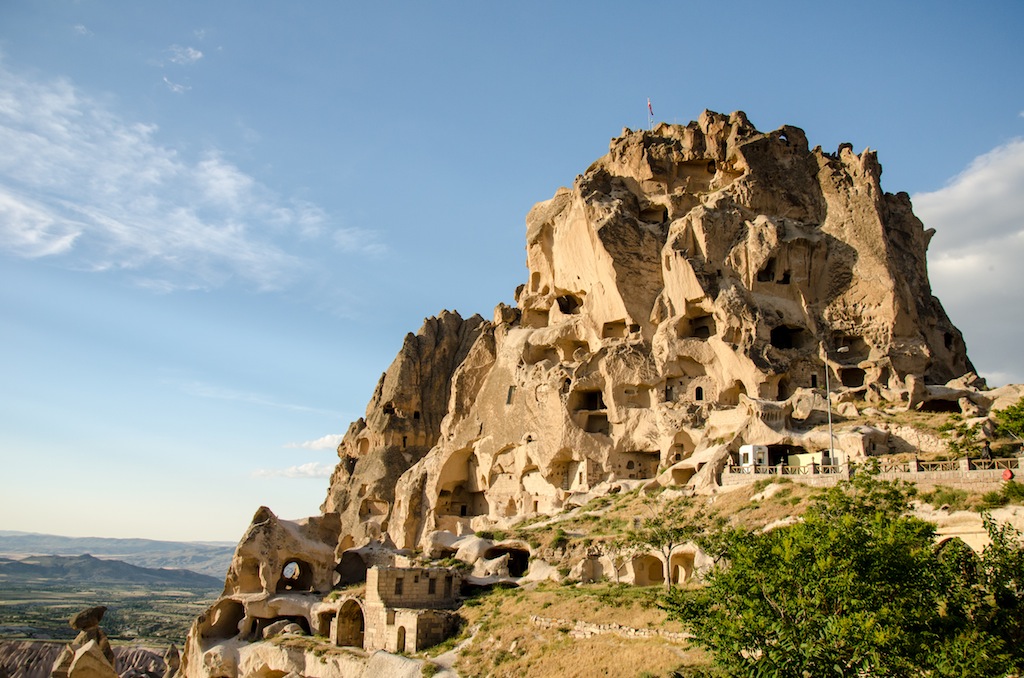 Get a panoramic view of Cappadocia from its highest point at Uchisar Castle. Once used as a point of defense for villagers against enemy attacks, the castle has been carved into from the exterior and interior to create a network of tunnels. Spiral your way up to the top to get sprawling views of the region—just be careful not to fall off the edge while taking a selfie. The most popular spot for Cappadocian sunsets, the Red Valley is famous for its rose-coloured rock formations that change colours right in front of your eyes. A scene that looks straight out of science fiction, the smooth yet rugged ridges are crisscrossed with hiking trails for the active set, while others come early to snag the best spots for watching (and photographing) the brilliant sunset. The widest of Cappadocia’s underground cities (there are 36 in total), Kaymakli goes eight floors deep underground, of which only four is open to the public. Not for the claustrophobic, this underground labyrinth consists of homes, cellars, stables and storage rooms, and even has its own ventilation system. Indiana Jones fans will also love the ‘rolling-stone’ doors that were used to block secret passageways.

With so much to see and do in Cappadocia, it's best to consult an experienced tour operator to plan a bespoke itinerary. We spent our days in Istanbul and Cappadocia with Amaze by Neon Tours who are local experts at creating luxury itineraries. From choosing the best hot-air ballooning company to recommending the most luxurious hotels in town, the team at Amaze will ensure that you have a smooth and seamless trip, full of unique memories to take home.

When it comes to the best times of the year to visit, aim for the end of April to June, and from September to mid-November. This is when you'll get the best weather (warm days, cool nights and less chance of rain), as less than optimal conditions can have you grounded and missing out on the hot-air balloon ride of a lifetime.

Ready to fly? Start planning your trip with Turkish Airlines, Small Luxury Hotels of the World and Amaze by Neon Tours.

See also: Top 10 Things To Do In Istanbul