A Scottish Abode: Inside Roderick Murray and Andrew Keith's Home 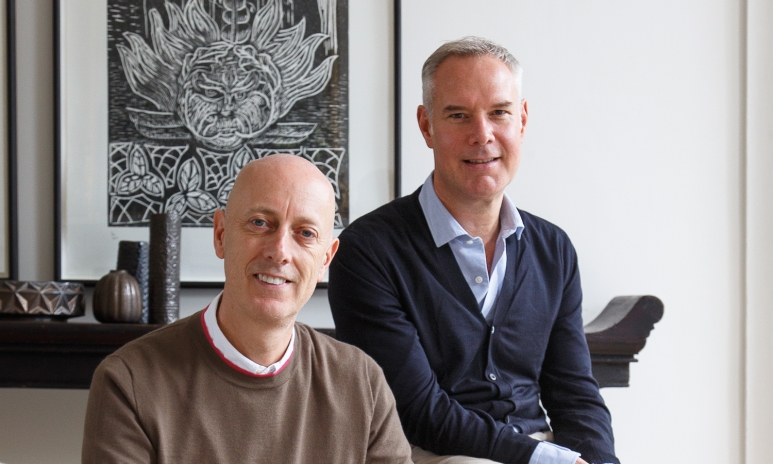 When Hong Kong-based architect Roderick Murray and his partner, Joyce and Lane Crawford president Andrew Keith, set out to purchase a property in their native Scotland, they had one goal in mind—to create a home.

They found the ideal space, a 200-year-old Georgian house with a Grade A heritage listing, in Edinburgh’s New Town, a UNESCO World Heritage area.

“We fell in love with the place when we saw it. It’s a grand Georgian townhouse without being too grand,” —Roderick Murray

The property, like many of its kind, had been converted into offices. However, the original structure and many of its features, including decorative plasterwork, were preserved behind boards and  under carpeting. 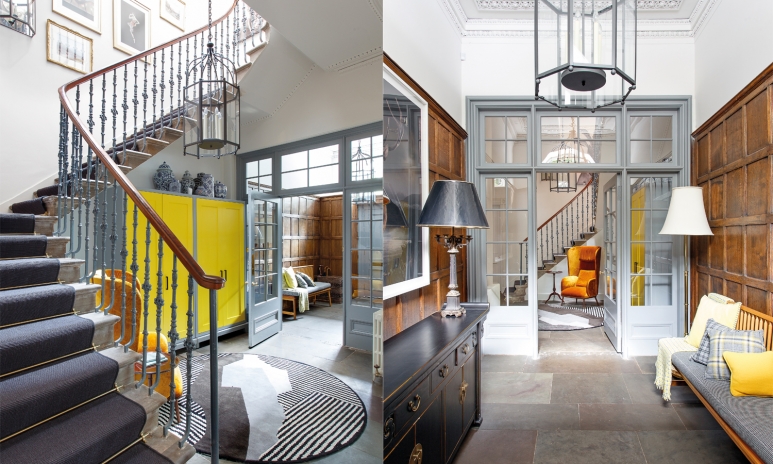 “They boarded up the floors, boarded over the fireplaces, boarded up the doors,” Murray says, “so it was all there. The bones of the place were great. We just had to get in there and make it a home.”

A journey in paperwork

Once they had the property in hand, Murray and Keith began what would be a two-year journey with local authorities and Historic Environment Scotland to ensure all the paperwork was approved. Then the couple took over the project management duties and put their ideas into action.

“We had to pay respect to the Georgian house itself, but we wanted it to be a space that we could live in and feel comfortable in,” Murray says. That meant bucking convention and rearranging the layout. 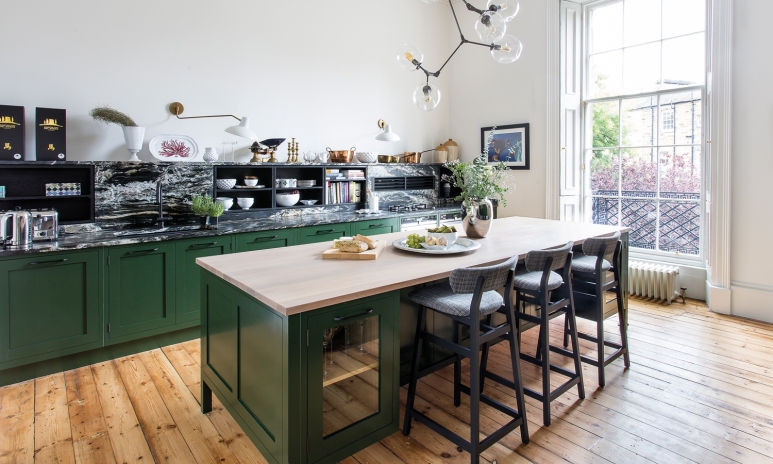 “In Edinburgh, there’s a plan that everyone follows. The kitchen and dining room are on the ground floor. There’s a drawing room to the front and then the bedrooms are elsewhere. We didn’t really want that.  We wanted a large lounge kitchen/dining space. So the only way we could do that within the planning restrictions was to put it on the first floor.”

Murray’s approach to the layout, while seemingly unconventional, made complete sense to him. “A space is a space. Until you actually designate a function, it could be anything. So it’s got huge potential. You start thinking of it in terms of home, and what the spaces should be.”

Colour was also a central aspect of Murray’s design, once again combining the couple’s shared experiences to make the space into a home. “It came from our travels. The summer before, we had been to Italy and Bhutan. In both those places you find shocking colour. To be able to use such big colour you need big spaces.”

The outside of the home also required work, including the installation of double-glazed windows designed for Georgian homes. 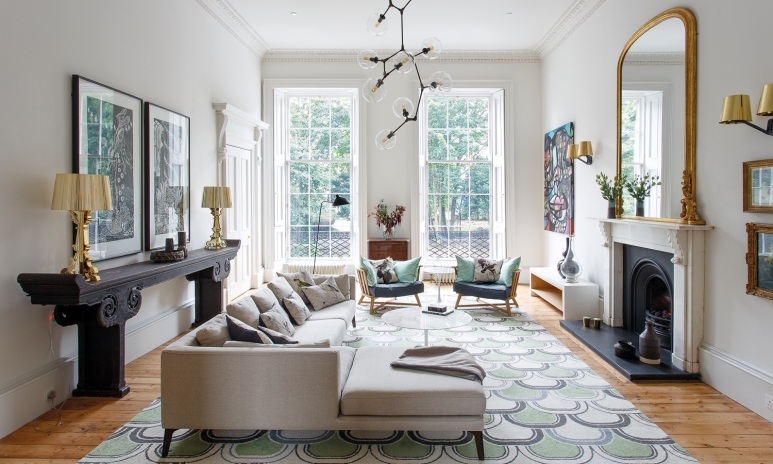 “The building looked ugly; putting back the original windows made a huge difference to the outside of the building,” Murray says. “It went back to its original look. The old house looked like it had its teeth missing. You put back the windows and all of a sudden it became complete.”

Murray embarked on a unique approach to designing each room—compartmentalisation. The new walls are short of the five-metre ceilings, reaching only as far as the picture rails and the 200-year-old creative plasterwork, giving Murray and Keith a contemporary feel within a Georgian space.

Once the framing of the space was complete, Murray and Keith wanted to fill up the rooms in one go. They shipped over a large container of furniture and objects, blocking traffic in central Edinburgh for the better part of a day. 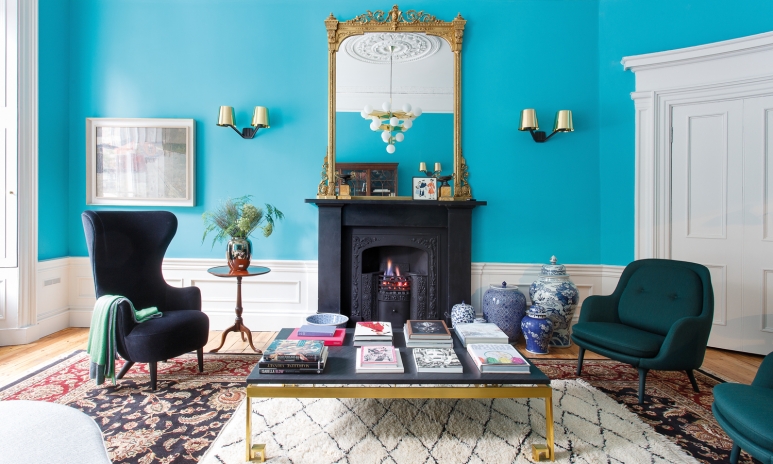 “We created a framework and then decorated it in a style we liked, filling it with furniture and objects, things that were personal to us. And then it came to life again. It’s a mixture of styles and periods, but it’s also a mixture of things we like, things that we’ve collected. So the house almost becomes curated by us.”

Murray’s favourite room is full of light and looks onto the grounds of his neighbour, the First Minister of Scotland. “I like being up on the first floor, being able to look out onto the green, and just being able to sit with giant floor-to-ceiling windows, massive amounts of light flooding in. It’s a very comfortable and glamorous space to be in.”

Keith and Murray hope to welcome family and friends to their new home soon. “We both have family who are overseas and come back to Scotland. As well as our home, we want it to be a family home.” 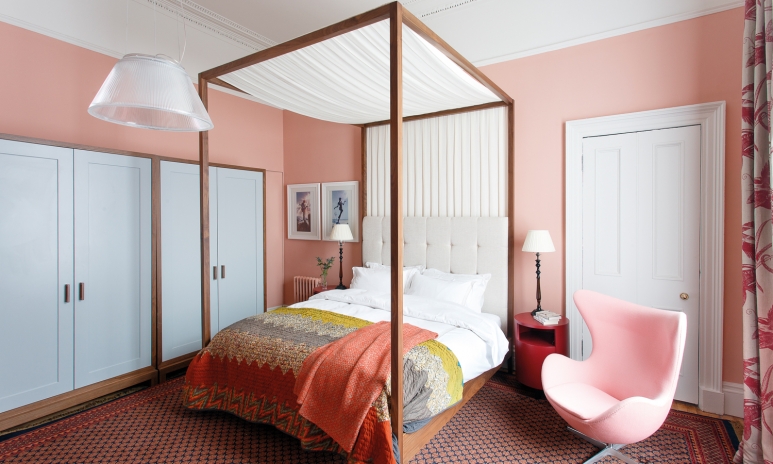 The couple are looking forward to the final step—spending time to get to know the space together, starting with a return trip this summer. “We’re going back in June and are planning to spend time there so we can bed ourselves down. We haven’t given ourselves time to settle—not even things like finding out when the refuse collection days are.”