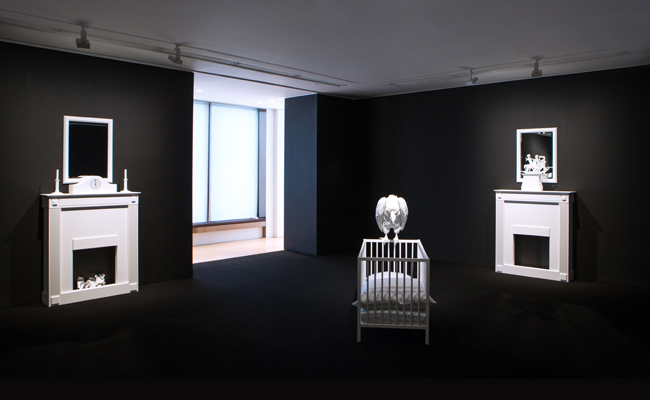 The walls are painted black. Stark white mantle pieces and haunting figurines are haphazardly placed around the room creating a sense of eerie calm. It’s as though we have walked into a black and white film set and, in some ways, we actually have. The main room of Galerie Perrotin has been transformed into not only an exhibition space for artist duo Elmgreen & Dragset’s latest exhibition, but is also doubling as a film set for the duo’s new short film to be played in Hong Kong later this year.

The eponymous duo, Michael Elmgreen and Ingar Dragset, use their wit and subversive humour to address serious cultural concerns. In this exhibition aptly titled The Old World, antiquated objects made of plaster sit atop each of the equally old-fashioned mantle pieces, representing the fading and dwindling respect for European culture and history. We speak to the artists to learn more about their work as a pair and where they find their inspiration.

HongKongTatler.com: When did you begin creating your art and what inspired you to begin your lives as artists?
Elmgreen & Dragset: We met in a nightclub in Copenhagen, back in 1994. Ingar was doing theatre at the time and Michael was writing and performing poetry. We became partners and when we realised that we shared a lot of the same views and interests, we started experimenting with performance art together. Neither of us ever had what you would call a traditional art education.

HKT: When did you decide to work together as a duo? Do you ever create any solo work or plan to?
ED: Our first performance piece was in 1995 and the first sculpture we did was in 1997. We have now collaborated for almost 20 years and have never thought of going solo with our art. We kind of developed ourselves as a duo and we create our ideas as such. 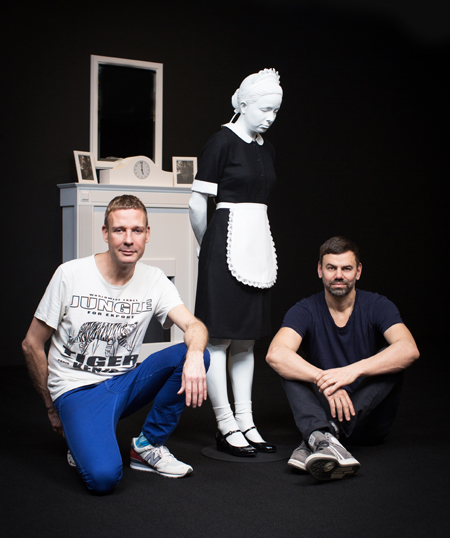 HKT: What is the meaning behind your work and the pieces you have in this exhibition The Old World?
ED: The works in The Old World all have close references to European sculpture and design traditions. The exhibition is inspired by the colonial past of Hong Kong and how things have changed since it was part of the British Empire. It is also about the cultural identity crises that Europe has experienced in recent years as it watches rapid growth elsewhere in the world, and how European cultures today must face no longer being a leading political, cultural or financial power. Therefore many of the pieces in this show have quite a classic look with some traditional figurative aesthetics but with a bit of a twist.

HKT: How do you find inspiration for the pieces that you create? There is such a wide spectrum of pieces, from the stark white mantelpieces to your take on the Little Mermaid.
ED: All the works are part of the same story about a European cultural influence that is no longer very strong. The mantelpieces refer to the traditional British domestic environment in which one always finds a mantelpiece even though it might be dysfunctional. Our male version of the famous Danish Little Mermaid was inspired by the original statue, which was shown in Shanghai during the World Expo. We find inspiration anywhere and everywhere, from newspaper articles and ongoing political discourses to books, films and architecture.

HKT: How do you think your work speaks to your audience? Is there any particular message you are trying to portray?
ED: We love to create a setting in which the audience can play the roles of being some sort of private detectives, finding and discovering clues to piece together the story and create their own versions. 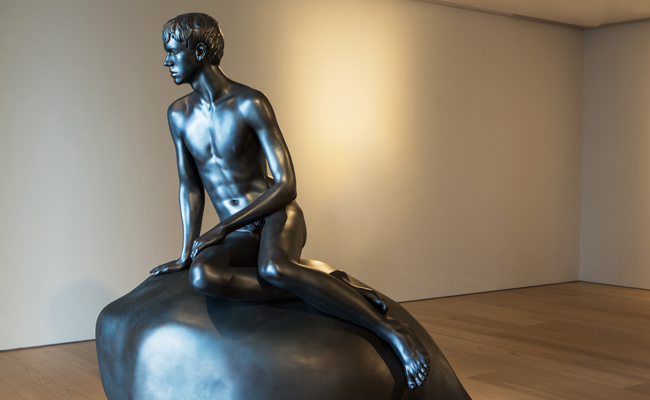 HKT: It has been mentioned that you would be creating a film using the Hong Kong exhibition as a film set. Where and when do you hope to play this film?
ED: If the post-production and editing is finished in time, we will show it during Art Basel Hong Kong (May 15–18). Otherwise, we will screen it at a later point in Hong Kong.

HKT: What do you hope to do next? What are your plans for the future?
ED: Right before coming to Hong Kong we opened a major museum show at the new Renzo Piano-designed Astrup Fearnley Museum in Oslo. In September, that same exhibition will travel to the National Gallery in Copenhagen and from there it will continue to the Tel Aviv Art Museum in Israel. Next summer, we will do an even bigger exhibition in Seoul at Plateau, which is part of the Samsung Museum.

HKT: Do you have any words of advice for young aspiring artists who hope to be as successful and talented as yourselves one day?
ED: Never try to do the right thing since that only ends up in creating something predictable, and don’t be afraid of anything!