With just days to go until the end of this landmark exhibition, we reflect on the significance of Peterson's depiction of a lawless world 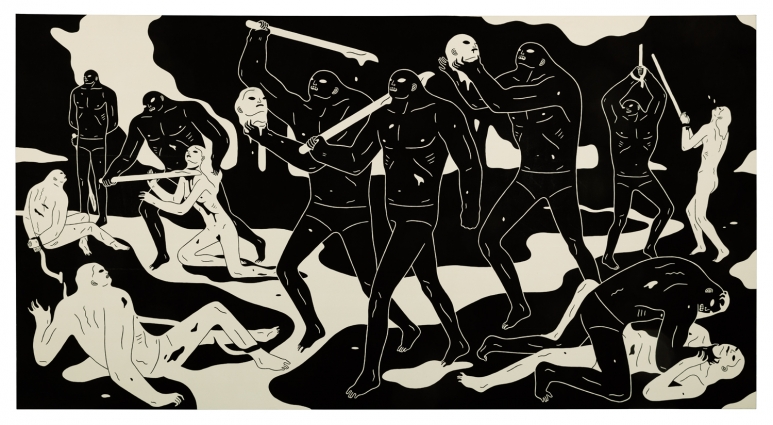 The LA-based artist Cleon Peterson’s second solo exhibition in Hong Kong, Purity, was the talk about town last Thursday when it opened at The Space with Over The Influence, a new online gallery and artist management agency founded by Dimitri Lorin. With the mission to promote radical contemporary art worldwide at its core, Over The Influence has hit the mark by presenting Hong Kong with a thought-provoking inaugural show.

Anyone who is familiar with Peterson’s work will know not to take the title of the exhibition too literally. Despite the arguable purity of the formal aspects – clean, graphic designs in blood red, white and black – the overall effect of the paintings is uncanny, chaotic yet orderly. Purity is the end goal rather than the subject matter.

Anyone who is familiar with Peterson’s work will know not to take the title of the exhibition too literally.

The first step into Peterson’s lawless world is breathtaking. By the door on the ground floor, threatening mercenaries march across a wall-sized black and white canvas, eradicating the enemy as they pass by. Men are captured, women are raped, swords and bloody heads are brandished in victory. Set against nondescript backgrounds, which at most hint at riverbeds or forests, Peterson’s signature figures reoccur in each painting as victims or perpetrators, interchangeably, so as to suggest a dark side common to all of mankind regardless of context. The tone is set for the rest of the show: thirst for power shows no mercy. 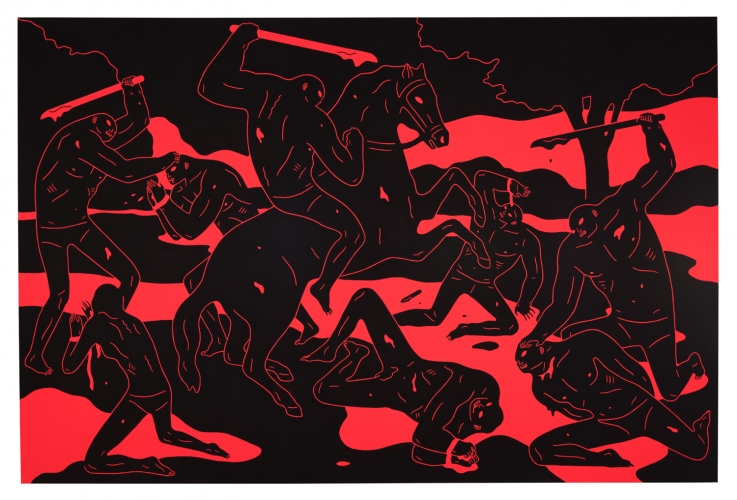 If allusions to combat motifs from Ancient Greek pottery, David’s Napoleon Crossing the Alps and Goya’s Disasters of War are undeniable, Peterson’s imagery in fact resonates more fervently within recent world events. In these history paintings of sorts, the protagonists are neither heroes nor conquerors, but instead anonymous warriors imposing beliefs and ideals known only to them. Classless and brutish, they seek domination at all cost. This is a world in which deviance has become the norm; the violence almost choreographed. In these works, Peterson has excelled in rendering violence equal parts gruesome and beautiful, A River of Blood versus Poison in the Minds.

Signature figures reoccur in each painting as victims or perpetrators, interchangeably, so as to suggest a dark side common to all of mankind regardless of context 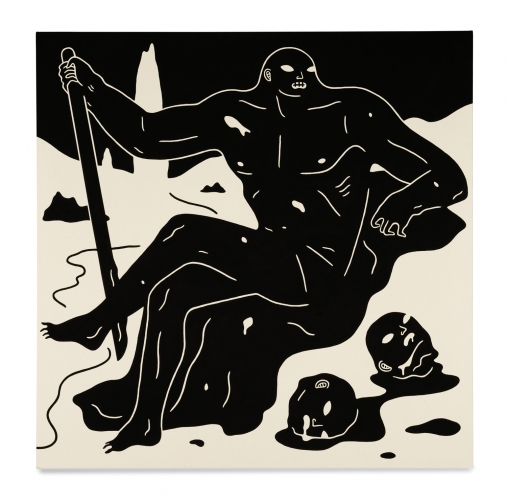 The journey through Purity ends at the back of the room on the first floor with a single man sat cross-legged on a throne, contemplating land beyond the frame. The battle was played out in the nineteen scenes preceding this one. Here, two heads lying on the ground bear witness to this mercenary’s morbid triumph. Creating Paradise reads the tragi-comical caption, another clue that purity is a work in progress.

Purity is at The Space until January 31, 2016 and on the streets of Sheung Wan

Arts the space Art Review Cleon Peterson Over the Influence