Ling Jian: Song of the Ancient Birds at Tang Contemporary

By Margot Mottaz December 02, 2016
With Ling Jian’s latest series of portraits revealed at Tang Contemporary, we speak with the artist about beauty, birds and the significance of music in his work 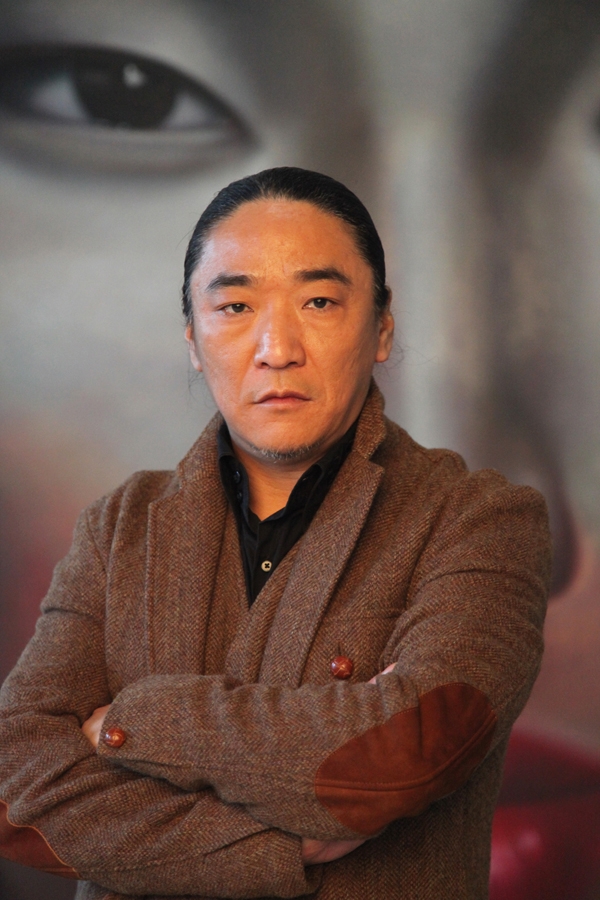 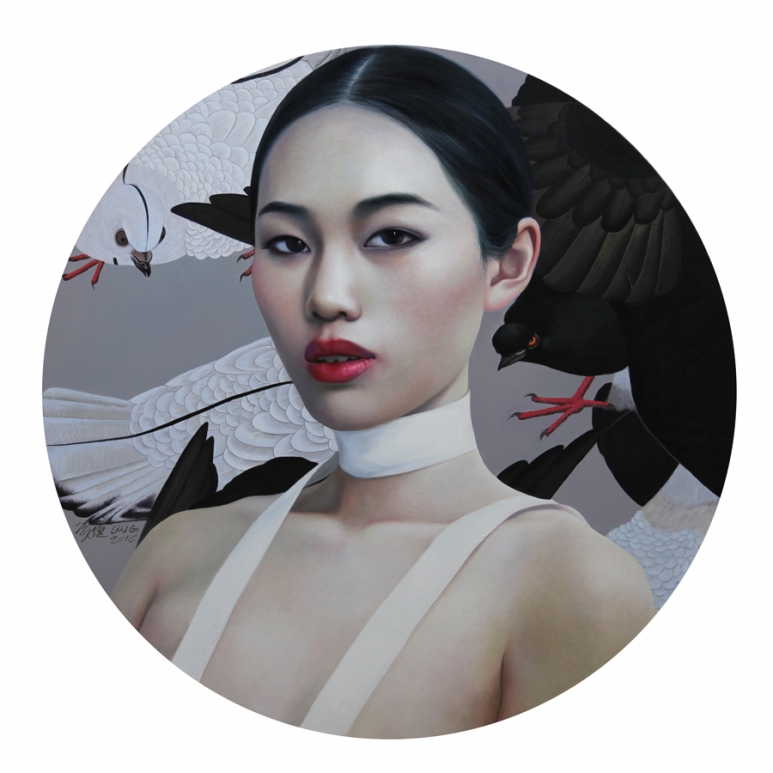 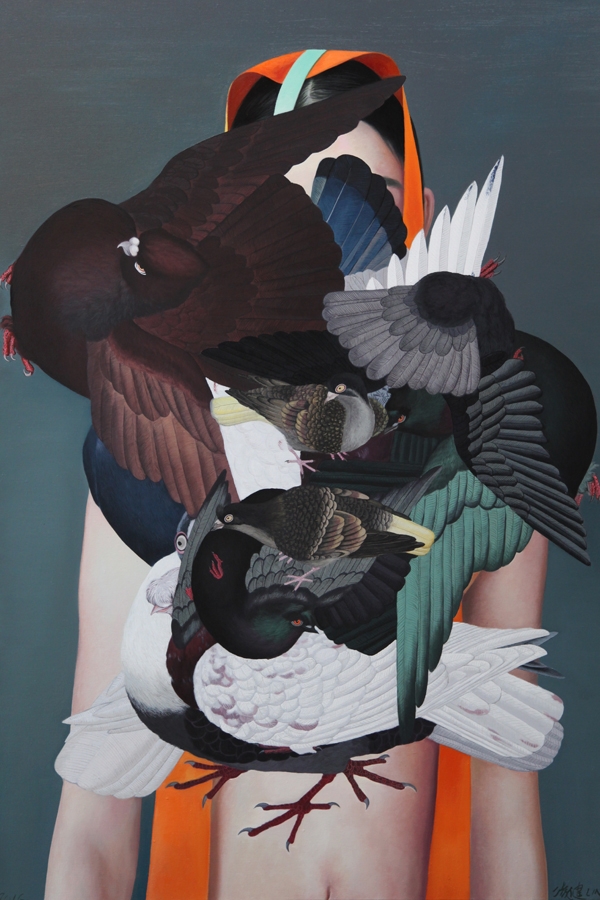 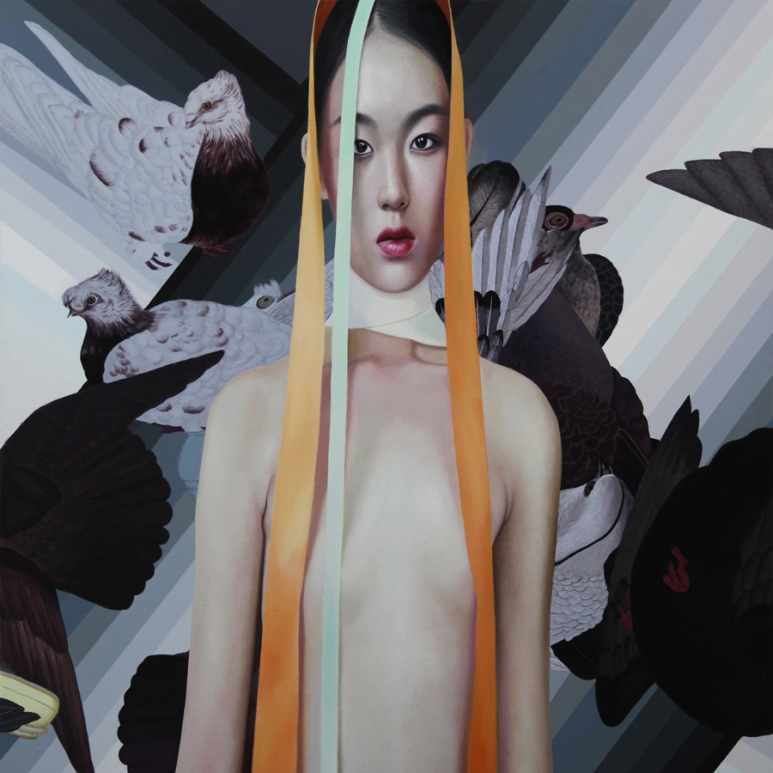 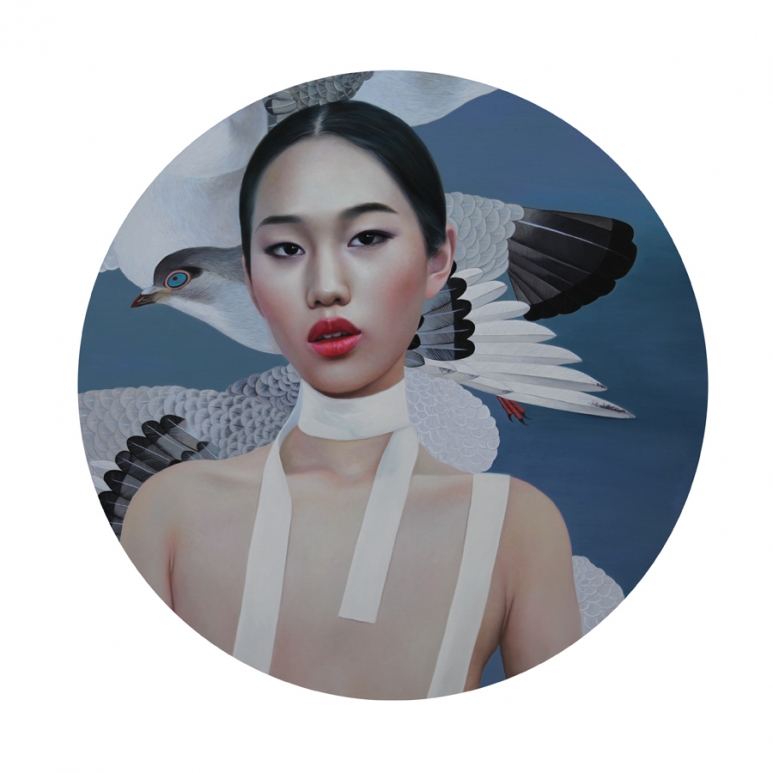 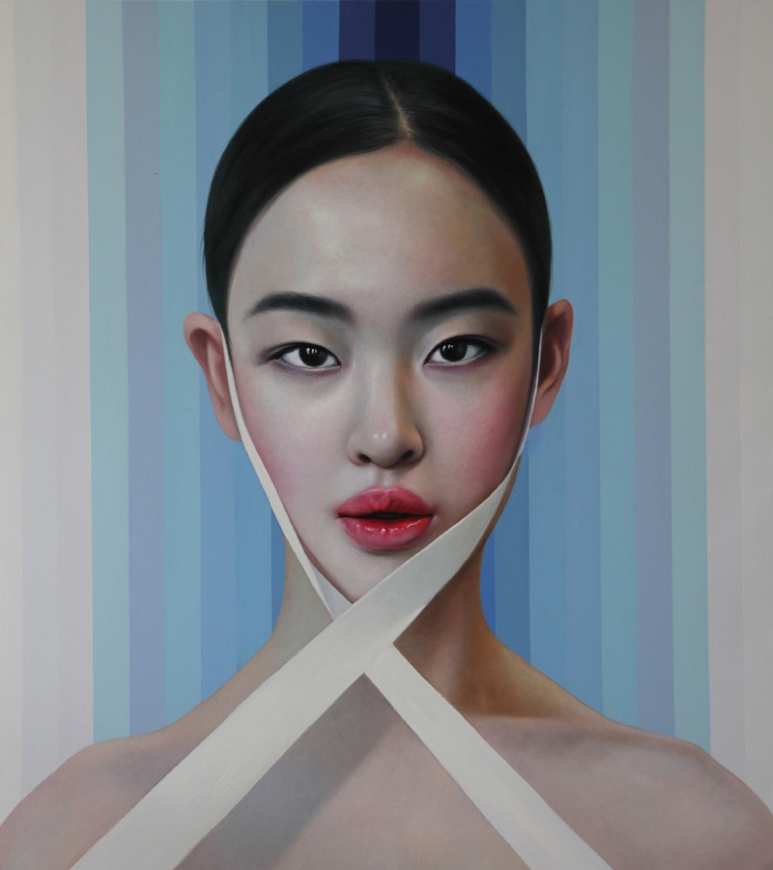 Lily with Ribbon, 2016 | Oil and acrylic on canvas 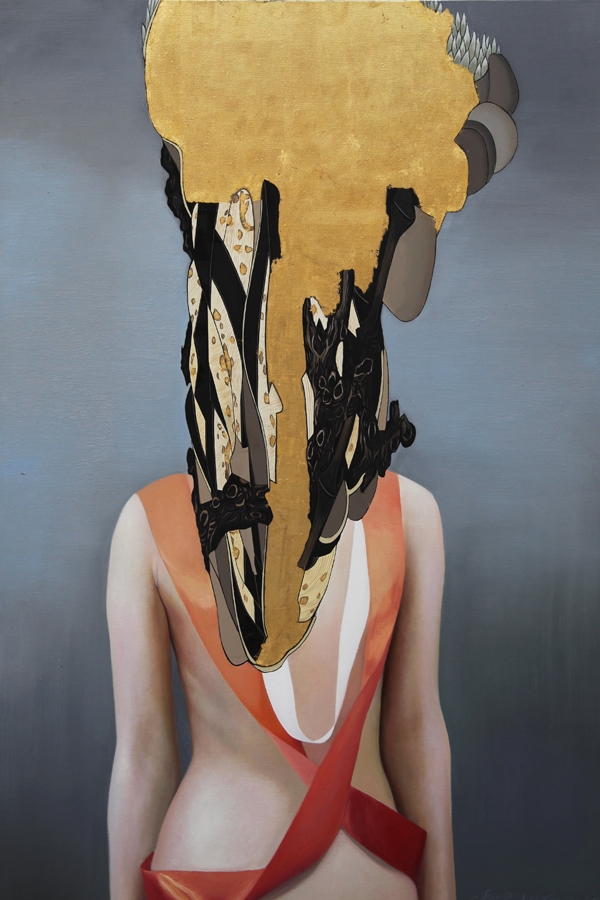 Ling Jian is one of those artists whose name you do not recognise yet whose paintings you are certain to have seen before. His signature style is unmistakable: he repeatedly paints Chinese-looking women, from the waist up, with translucent skin, enlarged eyes and red lips. His style is also memorable: he has mastered a seamless blend of cultures, time periods and artistic traditions so that each painting speaks to many on a global scale. In fact, the artist cites Guanxiu (832-912) from the late Tang period and Five Dynasties, Lucas Cranach (1472-1553) from the Renaissance, and Matthew Barney, a contemporary, as the three artists he most admires, a testament to his multicultural background and wide-ranging interests. Born in China and now sharing his time between Beijing and Berlin, Ling has been able to extract from each city, and more broadly each culture, ideals of beauty and questions of body image that he seeks to translate into his paintings of young women. In his most recent series, the women are either surrounded by Chinese birds taken from painting manuals held at the Forbidden city or have their faces covered with black and gold patches symbolising monks’ robes. In these harmonious compositions, China’s imperial traditions become one with contemporary aesthetics.

You live and work in Beijing and Berlin. What does each city represent to you?

Beijing and Berlin are two very dynamic artistic cities: they have some similarities but are fundamentally different. Berlin embodies the culture of the Cold War, but the diversity of its historical background and present culture have made art in Berlin very avant-garde. Berlin is a great place for contemporary artists.

Beijing embodies a conflict between a waning traditional culture and a rising modern civilisation. In this environment, this conflict clearly reveals Beijing’s infinite possibilities and inspires intense introspection regarding the city’s future. The culture of an ancient city has been gradually replaced by contemporary consciousness, and this shift is immensely inspirational for artists.

Your work is prominently portraits of young and attractive Chinese women. What is it about women that you are interested in?

There is a timeline to my depictions of Chinese women. First was my series, Nirvana, which was essentially focused on Buddhism. When I was painting this series, I very naturally encountered women as I was trying to figure out how to express the gender neutrality of Buddhist statues. In Chinese Buddhist art, especially as commonly portrayed, Guan Yin’s figure is very feminine, but with a solemn, calm beauty. In my paintings, I sought to evince this sort of beauty in the female body and facial expressions.

My next series was about the Cultural Revolution and revolved around scars. My mother was my creative inspiration here, showing that beauty could flourish despite the scars and violence of the revolution. I worked on this series of women for about ten years, and I have continued to paint women to this day. In essence, these women from modern life represent a conception of an era, including their reflections on the disappearance of idealism, the conflicts of commercialism, and their independent temperaments.

Who are these women? Are they real or imagined?

Some of these women are portraits of real models, but their forms had to have an aesthetic that sparked my creativity. Others were assemblages of imagined women combined to match my internal world: they are projections of myself.

Often, these women have translucent skin – a rather cold aesthetic choice, yet they are also eroticised. Why is that?

I wanted to be able to embody the warmth of the human body in painting; conveying this through painting is very important to me. This coldness is an aesthetic requirement, but also an abstract concept realised within a particular environment. There is no sickness in paintings, only the artist’s aesthetic choices. An artist may believe that a given form best suits his purpose, even if it might be a form that a viewer finds unhealthy. In fact, the history of art shows that art requires time to evaluate: many things that people found morbid or ugly in their time, such as the work of Vincent van Gogh and Pablo Picasso, are now years later to considered aesthetically pleasing, reflecting the intrinsic power of reality and art.

As for eroticism, I view sex, love, and feelings as eternal themes for they are an integral part of human life. When an artist’s work contains eternal human themes, the power of his artistic life extends into the future. I wanted to figure out how to come close to these feelings and desires. For example, in Chinese tradition, the image of white jade was often used to describe a woman’s warmth (or lack thereof), so the cool skin akin to white jade and the aesthetic of the skin of the women in my paintings are part of an Eastern aesthetic that I have consciously pursued.

In your opinion, how do beauty ideals differ or intersect between the East and the West?

The relationship between Western and Eastern aesthetics should be discussed from the perspectives of cultural philosophy, arts and humanities, and lived environment. The concepts of beauties are represented through these same means, but these values differ culture to culture. For instance, traditional Chinese philosophy is related to the universe: the beauty of the relationship between man and nature transcends humanity. This is why many traditional paintings depict the beauty of nature, the ecosystem, and the changing of the seasons. In a globalised world, ideals of beauty are becoming increasingly similar, but I personally believe that the most essential part of human nature is the difference in expressions of beauty, which is rooted in different values. My new series explores how you observe the aesthetics of your own tradition and how you determine the relationship to your own culture.

What is the inspiration behind your new series of paintings displayed at Tang Contemporary in your solo show Song of the Ancient Birds?

In recent years, my creative direction has undergone a significant change. In a time of globalisation, I am considering the differences between Chinese contemporary art and global contemporary art. By chance, I found a bird painting manual from the Forbidden City, made by the masters of the Kangxi and Yongzheng reigns as a model for imperial paintings. I was very surprised to find this manual showing that, long ago, these masters painted birds as refined, beautiful creatures with an aesthetic that was entirely pure. At that time, I was listening to Ohne Dich (Without You) by the German heavy metal band Rammstein, a song about love and death. One of the lyrics is, “Ohne dich… Und die Vogel singen nicht mehr” (“Without you… the birds sing no more”). That moment gave birth to a link between the song and the manual that completely transcended space and time. Song of the Ancient Birds is actually a very sad theme, and the beautiful birds in my images use their song to extol a culture that no longer exists. This is a cultural moment linked to the relationship between sentiment and pity and between death and rebirth. In that moment, this song and this melody inspired thoughts about these Qing-dynasty birds, and regret about the disappearance of a civilisation. This artwork is a new visual blend of Kangxi and rock music, which seems lyrical, but is actually a hoarse roar. I hope that these birds will one day sing again in the Forbidden City.

Traditional Chinese art and culture are undeniably a source of inspiration for you, notably with regards to the bird painting manuals you used in these works, while your approach to subject matter is very contemporary. What does this historical and visual juxtaposition add to your practice?

An artist’s work comes from real emotion, and traditional culture has become increasingly important to me, but I often wonder how best to present that traditional value and aesthetics in contemporary art while retaining the meaning. In this series, I have chosen the Forbidden City bird painting manual and Guanxiu, the traditional Chinese artist I most admire, added my personal re-examinations of contemporary art aesthetics, then blended them together into new paintings. The series is founded on an understanding of beauty, a perception of culture, and a contemporary artist’s exploration of his own independence.

In previous paintings, the women gazed directly at the viewer. In these works, however, their faces are often covered by abstract motifs. In a sense, figuration seems to give way to a larger degree of abstraction. What does this evolution mean in your practice? What are you attempting to convey?

This isn’t actually such a big change; they are still looking directly at you. Whereas previously you engaged with the women directly through their eyes, now it is an antique culture that confronts you. They are not abstract: for a portion of viewers, these are elements that feel abstract because they are estranged from their culture. If people choose to reflect and examine their cultures once again, then this direct gaze will become very concrete.

Can you tell me more about the relationship between painting and music in these new works?

Music is one of my creative inspirations because I think music is closer to the human soul. My past works have included Madam Butterfly and Don’t Cry for Me, and now Ohne Dich. Listening to music opens your heart: you directly represent or experience life from music, hovering between the abstract and the figurative. The power of music transcends time and space. A good concert is an eternal source of inspiration. In this sense, painting is a bit different. Music and painting are like twin sisters: music approaches the soul more quickly than painting, while painting enters your soul slowly but stays forever.