By Tamsin Bradshaw April 10, 2012
How to turn an enormous apartment on Conduit Road into a cosy home 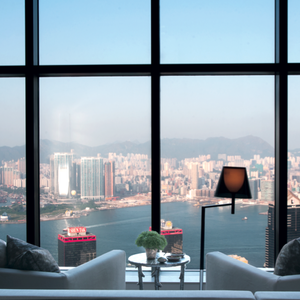 Two momentous events led one American couple to an apartment in the prestigious 39 Conduit Road by Henderson Land Development. The first was their children leaving the nest. The second was a job: his company offered him an exciting new role; one that would see the pair leave their suburban family home in the United States for Hong Kong.

“This was their opportunity now that the children are out of the home to have a place in the city,” says Nathalie Edwards, founder of Life Styling Ltd, and the designer who they hired to help them decorate. The couple therefore grabbed the chance to live in a high-rise apartment in one of Hong Kong’s top, new addresses. They chose a flat with stunning views of the harbour and back towards The Peak, along with double-height ceilings in the living area.

It’s the perfect space for entertaining in; something the residents do plenty of. They often host formal, sit-down dinner parties for small groups of six to eight, as well as coordinating cocktail events for larger numbers, so their home had to be able to accommodate both – as well as intimate evenings one-on-one.

Five tips on home and lifestyle trends for this season. 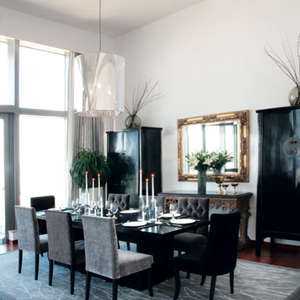 “We wanted the space to be simple, sophisticated, luxurious, but still comfortable and romantic for two,” says Edwards. The challenge was achieving this whilst ensuring that the sheer size of the living space wouldn’t overwhelm.

The designer counteracted this by making sure the proportions were exactly right. To do this, they had to “extend everything up high enough so that it incorporated the whole space,” says Edwards, which include custom-making a number of sofas, armchairs and rugs.

A unified colour palette and layering of textures also helped to create a sense of cosy intimacy that combats the downside of such a lofty, enormous space. Edwards and her team went with tonal variations of grey, black and silver throughout the room to delineate different zones, while keeping them cohesive and ensuring an easy transition from area to area. 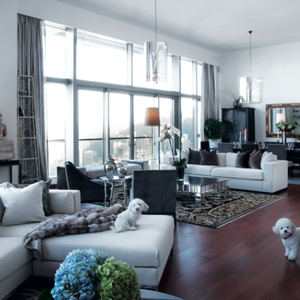 The space is divided into a formal dining zone, a formal seating area and a casual zone in which they can watch TV. “We used the darker colours in the lighter space and the lighter colours here in the dark space,” explains Edwards. In the dining room, she used “a very light base … charcoal shades on the table … and then we added some accents of darkness and metallics,” in order to reflect the sparkle of the view and [create] the illusion that the interior and the view outside are one. “The architecture is quite strong outside – greys and concrete. So it’s part of the room in terms of the colour tones,” comments the designer.

Looking for the perfect wine cabinet to hold that lovely wine collection of yours? Here are the top 10 on the market.

In the “informal lounge”, the design team chose “a dark base with light accents,” such as light-toned cushions. They used “a deep, dark taupe on the wall to bring warmth into the room,” explains Edwards. 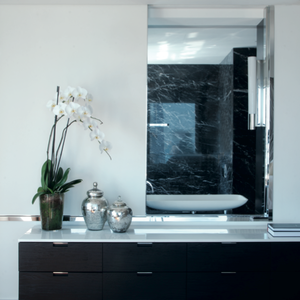 Along with colour, Life Styling Ltd used a large and a small version of Moooi’s Light Shade Shade in the dining room and formal seating area, to help unify the two zones. “We wanted the lights to all live together but we didn’t want to hang the same light twice,” says Edwards. “This way, we could play with the big and the small.”

The Shade Shade’s juxtaposition of modern and old-world is also the perfect metaphor for the home itself, which is a striking meld of “old-school antiques” and modern finishes. The resulting look is sophisticated and glamorous, yet still approachable. 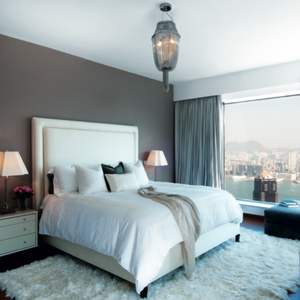 The private spaces sing the same tune as the public spaces, with plush, traditional beds offset by modern lines in cabinetry and wardrobes, which Life Styling Ltd added in. The designers even set up a cosy corner the residents can retreat to when they fancy a romantic moment together. It is this spot that the residents favour above all else. “We call them the wine chairs,” says Edwards of the two huge, comfy armchairs that reside here. “They can come in in the evening, drink a glass of wine and just catch up.”

The chairs sit in front of one of the best views in the house, overlooking West Kowloon and the Tsing Ma Bridge. As the sun sets and the light softens, it’s almost as if a process of transmutation has occurred. Shimmering fabric becomes noble metal, and this home becomes pure silver.

Learn how to transform a townhouse into a Parisian home here.