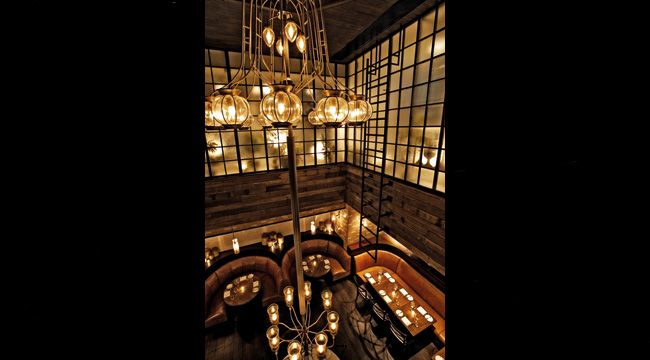 Bloom’s arresting interior is a marriage of Parisian salons in the 1900s with the Prohibition-era speakeasies seen in America. With the subdued lighting, dark wood and leather accents, we are set up for a cosy evening ahead. Once a regular haunt for post-work mobs, the oversized booths tucked away at the back are now occupied by couples and smaller groups. We, on the other hand, were squeezed together on a tiny side table with just a few inches separating us from our neighbours. Not the most romantic or indeed, private, tables on offer in Hong Kong – nab yourself a booth if possible. Though not terribly busy the night we visited, the music and chatter from Lily upstairs created enough buzz for us not to feel awkward.

Contemporary American fare with creative flair is on offer here, with a menu that is neither exhaustive nor limited. Visitors have been known to return for the incredibly fresh raw bar Bloom pride themselves on. As such, we kicked off the evening with a dozen freshly shucked oysters from the US and Australia, though there were also the usual French suspects on offer. Crunchy and briny, the freshness of these molluscs shone through with nothing more than a spritz of lemon needed. The richness of the roasted bone marrow slathered across crisp mini French baguette slices was balanced by the acerbic red wine reduction, shallots, grapes and green apple slaw. The fried French chicken livers arrived unexpectedly breaded but are delightfully moreish – a treat for any liver fans. The veal Milanese comes beautifully golden and crisp with a caramelised lemon to bring this classic dish to new heights, while the grilled spiny lobster tail, though unquestionably fresh, was unfortunately slightly undercooked with areas of translucent meat at the centre. An inviting tray of complimentary digestifs was unveiled before dessert was ordered, including a dizzying coffee-infused tequila infused in-house. As for the desserts, the “Nuts & Beer” brings together a sticky multi-nut toffee tart with Chimay beer ice cream that while enjoyable, bordered on cloying towards the end. The “Bonnie & Clyde” was perhaps the standout on the menu with its whimsical combination of an espresso brownie with caramel corn cheesecake, however the two textures clashed to create a pasty consistency. A slightly disappointing end to what was otherwise a memorable meal.

The wine list is both thoughtful and geographically broad, with a dynamic selection available by the glass to suit any budget. Cocktail lovers, fret not! The bartenders at Lily upstairs are able to send down an array of Prohibition-inspired cocktails.

Service at Bloom is knowledgeable and responsive, with our comment about the undercooked lobster tail promptly acknowledged and remedied with desserts on the house; an autonomous trait often seen lacking in Hong Kong.

A substantial meal for two without wine will come to around HK$1,500. Considering the jet-fresh seafood, location and fantastic service, Bloom can be sure to expect another visit from us again.