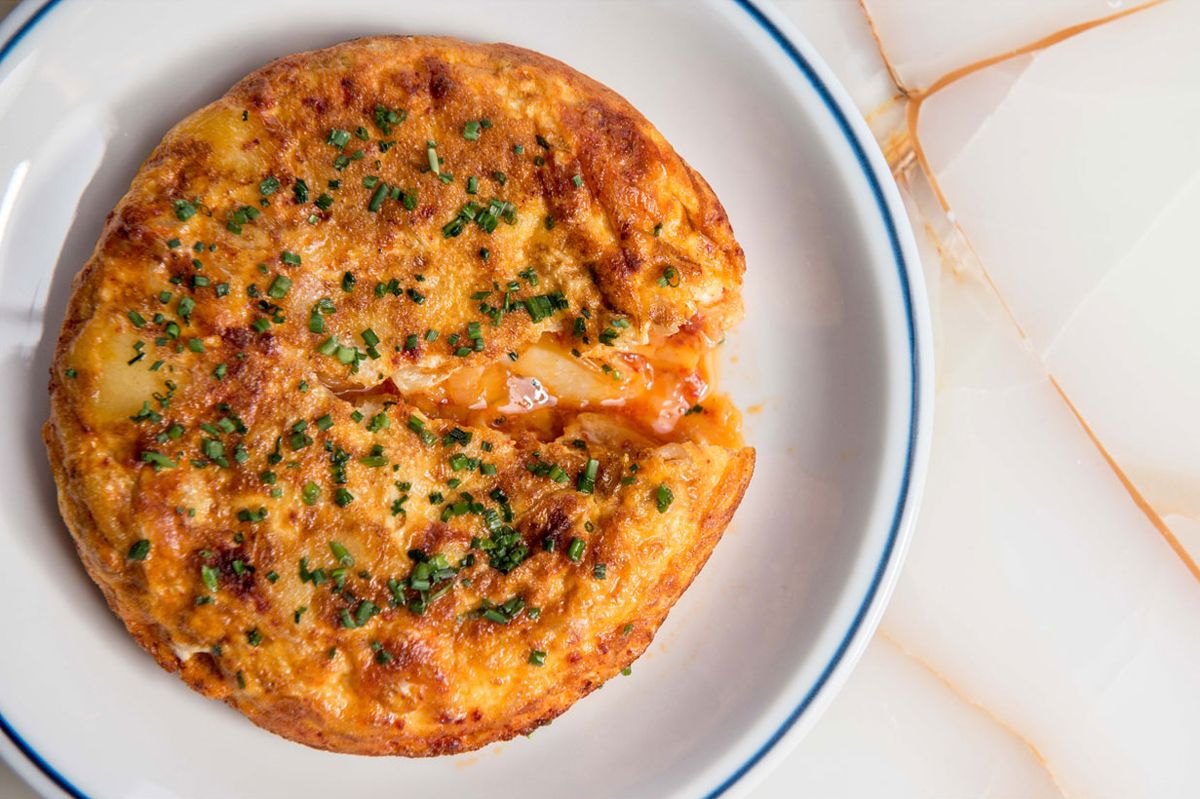 Cassio immediately has a blunt sultriness about it, with its moody lighting and luxurious surfaces, and the first feeling you get when you wander in is that you’re most definitely in a bar-restaurant—emphasis on the bar. An impressive wall of spirits and generous amount of bar seating greets you as you round the corner from the hostess stand, followed by a smattering of tables for groups around the perimeter of the room.

Through the doorway is where you’ll find another bar area and spacious terrace replete with sparkling fairy lights and tropical print sofas for lounging on. Music is a rotation of inoffensive pop and club tracks, as befitting the venue’s Dragon-I provenance.

Anyone who has been to London will be delighted to hear that at Cassio, the food is “by Barrafina”—and as long-time fans ourselves, we were excited to try a few of their classics.

The obligatory padron peppers and pan con tomate make sensible snacks to nibble on while perusing the rest of the menu, though the latter seemed unnecessarily fussy having been cut into small, bite-sized squares. Another classic of tortilla was pretty textbook perfect—a simple presentation of golden-brown omelette (made with Japanese eggs, their rich hue apparent from the softly-set curds within) with white onion and confit Agria potatoes.

One of the highlight items on the seafood menu is the Spanish Carabinero prawn, a heftily priced specimen at HK$248 per piece. It’s listed as ‘large shell-less torched red prawn’ but it, thankfully, comes with its shell (and juicy head) intact. The prawn we had may have been just shy of its prime, as the surface of the flesh had begun to soften—but its inherent sweetness was not lost. The prawn is served on thick seafood bisque, which begs for hot, crusty bread to wipe it all up. It’s a shame then that the bread cubes we are served are cold, cottony and drier than we would have liked.

Surprisingly, one of the more stunning selections came in the form of the spinach and pear salad with Idiazabal cheese, pecan nuts, pomegranate and 15-year-old balsamic vinegar. Every element is a thrill: the verdant, crisp baby spinach, the light and excellently caramelised pecan nuts and the fruity tang of the pomegranate all working harmoniously with the slightly smoky, buttery sheep cheese.

Tender Spanish lamb cutlets are of excellent quality and served with pert cubes of roasted aubergine and baby onions, but they did not need the sticky jus it came blanketed in as well as the (rather overshadowed) nutty romesco sauce, which would have been a strong enough pairing in itself.

For dessert, a little flan is smooth and creamy despite a few air bubbles, and the addition of salted caramel, peanuts and meringue gives it an extra dimension.

A short but sweet selection of Spanish wines are available, and a dry red Castillo Labastida 2012 from Rioja is a safe enough selection to cleanse the palate after some of the more powerful flavours of the lamb. We would love to see a greater variety of sherries, and are pleased that the bar offers a Rebujito, a classic Andalucian cocktail of dry fino sherry cut with lemonade—a true taste of Spanish summer.

While we felt excited for Cassio, it certainly did not seem like the staff were as invested. Recommendations lacked conviction and detail, and we were not able to taste the wines before being poured the full glass.

A meal for two with wine and service averages around HK$1,300—big ticket items such as the Iberico ham, Carabinero prawn and lamb cutlets are the more expensive items on the menu kicking at around HK$248-$298. Portions are reasonable.