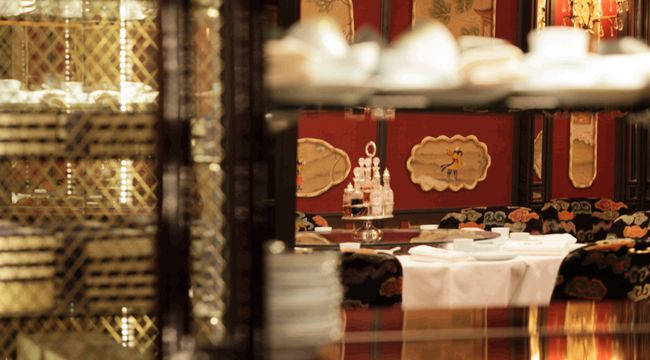 Nestled on the fourth floor of Landmark Atrium, China Tang, the sister restaurant of Island Tang and Kowloon Tang, is the latest culinary venture of Sir David Tang and media mogul Peter Lam. An ingenious match of nostalgic old Shanghai and classic British aesthetics, the refined yet understated dining space exudes an air of upscale sophistication with jade tableware, plush carpeting, hand-embroidered wallpapers, antique clocks, trompe l’oeil on mirrors and glass, among other tastefully exquisite elements. Much like Tang’s other venues, this is one of the most opulent Chinese restaurants in town, sure to become one where the glitterati will regularly visit.

China Tang serves quite an array of cuisines from Beijing, Sichuan and Canton, as well as a separate dim sum menu – so it can take quite some time to decide on which dishes to go for. For starters, we ordered the steamed Shanghai xiao long bao but found that they were, despite the nice fourteen folds on each dumpling, surprisingly average. The wrappers were not thin enough, the pork filling even a bit mushy, and most unfortunately there was not enough soup within, making this Shanghai classic pretty forgettable. Luckily, the subsequent dishes are far more impressive. The waiter kindly suggested that we order a platter of both the signature barbecued pork and roasted suckling pig with black truffle. Rich and unctuous, the former is made with the fatty belly underside of Kurobuta pork, the strong sweetness offset by a hint of black pepper; the latter features interlaying cubes of fats and pork roasted to perfection beneath a layer of crispy skin, though the taste of black truffle is not obvious. The only reservations we had were with the small portions, which we later found most dishes suffered from. We also tried half a portion of roasted chicken with crispy rice, which, despite its seemingly dry and unappetising appearance, is amazingly succulent and tender. But the scrambled egg white and tomato on a bed of layered tofu is hands-down the highlight of the evening – a tomato fashioned into a flower is placed at the centre of the dish, nestled among scrambled egg white atop waves of tofu, with a sprinkle of red dates lending a natural sweetness to pair with the tang of the tomatoes. So compelling was this dish’s appearance that even our neighbour could not help but ask us for its name on the menu. The combination succeeds in bringing about harmony in texture and flavour among some very different ingredients. We also love the two small bowls of carbs we ordered – braised e-fu noodles with scampi and fried rice with whole abalone. Springy and fresh, the crustacean is deftly executed yet again, a bit small on the portion. The fried rice is probably one of the most enjoyable dishes we had for a while, with each grain of the fragrant fried rice having a nicely al dente texture. We ended our meal with muscovado sponge cake, which is moist and tender, leaving us head over heels in love with the kitchen.

China Tang is one of the rare Chinese restaurants to list helpful wine scores for reference in their wine list, including those from Robert Parker, for one. The wine list is rather extensive, with well-represented bottles from both old and new worlds across a wide price range, though wines by the glass and half-bottle options are limited. We enjoyed the glass of Single Vineyard chardonnay recommended by our waiter, which is crisp and dry and pairs nicely with most of the food we ordered.

Service is friendly and courteous, but sometimes erratic. While one waiter attentively brought out small tables for patrons to place their shopping bags, another staff member tried to talk us into buying more costly dishes and failed to identify one of our dishes when asked.

A sumptuous meal for two with a glass of wine each costs around HK$2,700. While not inexpensive by any means, given the prime location at the heart of Central, premium quality of the ingredients and upscale renovation, we think the price is acceptable.