Restaurant, $$$, Modern, Mexican, Western District

The cool new face of Kennedy Town is neatly summed up by the arrival of this modern Mexican melting pot of a restaurant 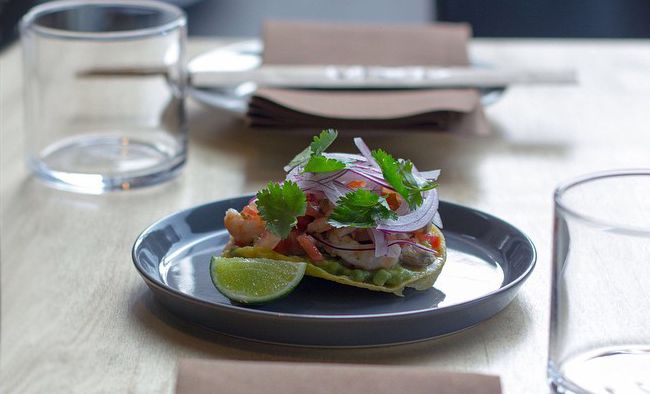 In Kennedy Town, the future is here – and we’re not just talking about the extension of the MTR line and its wealth of shiny new machines and glossy PR. On the corner of New Praya Road, overlooking the smoggy waterfront, is Tung Fat Building, an unmistakeably new and modish renovated walk-up with flats commanding upwards of 80-100k a month. It’s in striking contrast to the peeling-paint apartment blocks and steampunk-esque car repair garages within its radius, and at its base is where Chino lies, a stylish accompaniment with its matching black-and-white aesthetic, pale concrete floors and clean lines mixed with bold graffiti art. It’s a familiar palette that has echoes of a particular cult no-reservations restaurant that we’re loathe to mention (because it should be obvious), the kind of establishment that has cemented its place in lifestyle mags and style bibles long before anyone has had anything to say about the food. The vibe is fun, the music is loud, and every night there is nary a seat (be it at the bar or at the smattering of tables) that goes cold.

While Chino’s inspiration lies in the vibrant culinary landscape of Mexico, it’s clear that chef Erik Idos has brought over many influences from his tenure at Nobu at The InterContinental. Japanese ingredients are cleverly fused into Latin American staples, such as a punchy cherry tomato salsa (all the salsas – five in total – are all excellent, so get the full set at HK$120 and ask for extra tortilla chips or chicharrónes) where the shrill tang of vinegar is tempered with the herbaceous hum of shiso leaves, or the scallop and uni tostada, which is finished off with salsa fresca and a flurry of toasted nori. There’s a tortilla soup made from a chipotle-spiked dashi, a ceviche of market fish (hirame, on our visit) with yuzu, and premium Kagoshima wagyu beef from Nozaki Farm that’s served tataki-style – though the last two dishes are not our favourites. The fish, which already tends to be lean and bouncy, becomes even tougher under the attack of acid. It’s pretty to look at, but overall, the dish lacks salt and sweetness to counter the pucker of the marinade, though oddly the yuzu fragrance is not as pronounced as we would have liked. Crushed cashews added texture but nothing else – it’s a dish that would benefit from more refining to justify its HK$138 price tag. As for the beef, the unmelted fat means the slices remain slippery and greasy. A healthy amount of pickled wasabi is added, we presume, to cut through the fat, but it’s too jarring a partner for the oddly bland beef. Much better is the widely lauded chicken and egg tostada, where the chicken is more akin to juicy pulled pork, its rich, smoky spicing expertly mellowed out by the vibrant fried egg with its wobbly yolk. On our visit, the kitchen wasn’t doing dessert, but praises have since been sung for Chino’s Thai tea tres leches cake, which sounds promising.

There’s plenty to make the elbow-bender order a few rounds, be it the Mexican Minerva beers or Suntory Black pilsner on tap, strong cocktails (margaritas, but also the tequila-based Batanga with Mexican coke and lime), or list of mezcals. For those still on the wagon, there are agua frescas, Jarritos sodas and maté sparkling tea.

The young staff are friendly, but not quite as assertive or confident as we would have expected them to be. Given time, no doubt they’ll have a bit more swagger as befitting of a restaurant such as Chino.

Budget around HK$600 per person for a reasonable meal with a drink or two – it’s not inexpensive by any means, and some of the portion sizes may come as a surprise.