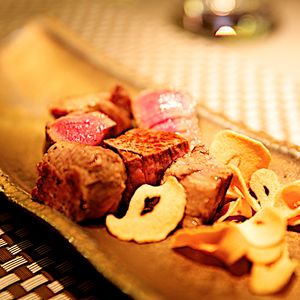 IM teppanyaki is not the kind of restaurant with a stunning panoramic view of the harbour or invaluable art pieces on the walls, but it would be unnecessary as its true charm lies in the wonderful artistry of the grill chefs at the two teppanyaki counters. Serenely situated at ground level on Tung Lo Wan Road in Tai Hang, this new restaurant puts a modern twist – by way of glass and mirror elements and bright lightings – on the rustic interiors commonly found in traditional Japanese eateries, best exemplified by a glass wall encasing numerous tiny grass balls (known as sugidama) adjacent to the sliding wooden entrance. The small but cosy venue is divided into two rooms seating eight or 12 persons around the grills. Although it was quite tranquil when we visited, given the rather cramped seating, we imagine it could turn quite boisterous should our neighbours be rowdier, as the sounds may ricochet off the hard surfaces. For a more serene environment, the inner room can be booked as a private room for 7-9 people at a minimum charge of HK$12,000.

Opened by Lawrence Mok, the former executive chef at Inakaya and Nadaman, the teppanyaki restaurant allows customers to choose their own grill chefs, and Calgine Cheng prepared our food the night we visited. We opted for the Mok’s menu set dinner, which started with a trio of clam in sweet and sour sauce, vegetables and some sweet dried Japanese sand lance. The ingredients were very fresh and boasted well-balanced flavours, among which we particularly fancied the dried sand lance, a perfect snack to go with beer.

While the Hokkaido scallop with crustacean essence was delightfully springy in texture and burst with umami, the tantalising Boston lobster with golden roe cream sauce entirely stole the show, which was delectable and matched impeccably with the seafood. The foie gras with fruit and teriyaki sauce would have been better had the sauce not been so thick and strong-flavoured, though the fresh fruit did serve the purpose of balancing the unctuousness of the fried foie gras, which was crisp on the outside and tender within.

The subsequent palate-cleansing chef’s salad comprised of assorted fresh vegetables and fruits and the simple combination was nicely presented. The ensuing mushroom and pumpkin were imported from Holland and Japan respectively and grilled to perfection, followed by another highlight of the dinner, the A5 Japanese premium beef served with a pinch of Himalayan pink crystal salt and wasabi. Cut into cubes and slices so that we could enjoy the different textures and cooked medium-rare, each mouthful was juicy, tender and melted in the mouth leaving behind a lingering fragrance. It was an excellent match with the fried rice, miso soup and pickles – the fried rice was cooked with a bit of ginger and while not overly oily, was a tad underseasoned. The miso soup cooked with the head of the lobster we just had was so warming and richly flavoured that we finished every single drop in the bowl.

We ended our meal with a wedge of honey melon and seedless Kyoho grapes; both were equally sweet, refreshing and succulent, with the latter carrying that characteristic mellow wine-like aftertaste.

Overall, the experienced teppan chefs in the restaurant let the top-notch ingredients shine for themselves, only using their dexterous grilling skills and limited seasonings.

The six-pages-long wine list comprises predominantly sake with a limited selection of wine – there were only three options for wine by the glass. The sake section has a few tasting notes under each kind of sake, yet oddly the information is different in Chinese and English. The 300ml bottle of Rihaku sake suggested by the wait staff is mellow, not overly sweet and full of rice fragrance.

The service was generally dedicated and attentive. There were two waitresses serving around 16 customers, meaning we felt pretty well looked after. They were able to explain the dishes, and promptly and graciously switched some items for us when we mentioned some food allergies.

A sumptuous meal with eight courses for two plus a 300ml bottle of sake comes to around HK$1,500 per person, which is by no means inexpensive. But given the quality ingredients, the outstanding grilling skills and the attentive service, it is rather worth the high price. Their lunch sets, on the other hand, range from HK$180 to HK$320 and are more wallet-friendly.