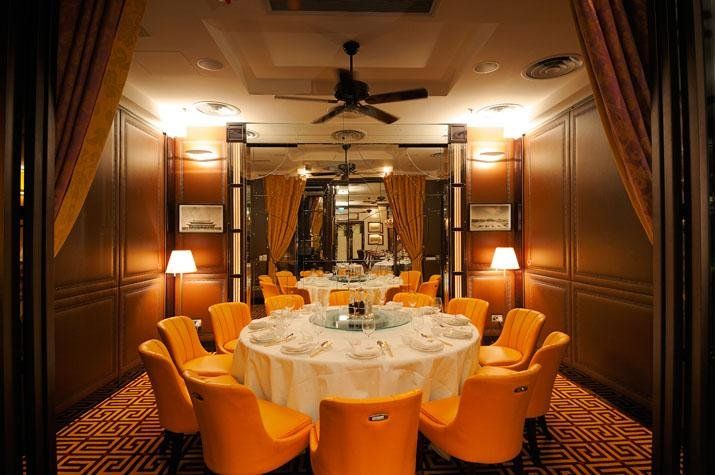 As with David Tang’s other projects (Shanghai Tang, China Club), Island Tang is beautifully designed, incorporating nostalgic elements of old Hong Kong such as framed pictures of a plane flying over Kowloon into the old Kai Tak airport. But with the addition with of the slow ceiling fans, comfortable brown leather seats and glass partitions, Island Tang also has the air of a brasserie, albeit a Chinese one. The seats are quite tightly packed, giving the open dining room a cosy if somewhat noisy atmosphere.

Island Tang’s menu is not overly large and consists of all the Cantonese favourites such as roast meats, dim sum and regrettably, a large number of shark’s fin dishes. If dining there at lunch, two dim sum items that should not be missed are the signature shrimp dumplings (har gau) and spring rolls. The dumplings may be petite, but the shrimp is perfectly crunchy with a thin and light skin. The spring rolls are piping hot and crunchy, and the unusual filling of taro gives it depth. If more of a meat eater, the roast goose is excellent, with a delicious layer of fat under the crispy skin and plenty of gamey flavour. The crispy skin chicken is also good: the chicken is fresh, but it is a tad over-salted, making it difficult to eat without rice. The barbecued pork (char siu) is more disappointing: although we requested a fattier cut, it came lean but tender. One of the best dishes we enjoyed was the abalone and chicken congee: thick in texture with plenty of tender chicken pieces floating around, it could have done with more spring onion but is perfectly adequate without. Finally, for dessert, in addition to the usual egg custard and red bean varieties, Island Tang also has more interesting items such as a coffee and coconut pudding, or Italian gelato.

The wine list at Island Tang caters primarily to those drinking by the bottle, with a premium selection that includes the usual suspects from Bordeaux, as well as good vintages from Romanee-Conti and Opus One. If drinking by the glass, however, there are only two choices: a chardonnay or merlot, both from Newton Vineyard in Napa Valley and priced at HK$138 per glass.

Not the most impressive initially as although we had booked a table on the hour, it was not ready and we were not seated until twenty past. Once seated, however, the service improved with smiling waiters who are attentive to our needs, even if somewhat presumptuously halving our dim sum order when it was deemed we ordered too much.

A meal for two without wine comes to just under HK$1,000. This is not inexpensive but given the impressive surroundings in the heart of Central and the well-executed dishes, it is worth the occasional splurge, especially if dining on the company account.