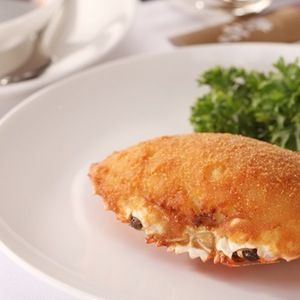 Seventh Son is the latest venture of Chui Wai-kwan, the seventh son of the legendary Fook Lam Moon founder Chui Fuk-chuen. Occupying three stories in Kwan Chart Tower, the new eatery is just a few blocks away from the Wan Chai branch of Fook Lam Moon, with the fourth floor containing the office and the kitchen, the fifth floor the dining area, and the sixth floor exclusively for VIPs. Unpretentious and contemporary décor defines this traditional Cantonese restaurant, which features wooden floors, luminous lighting, fish tanks, and neatly spaced wooden tables, with a suanzhi wood chair, a piece of calligraphy and small shrines for Guan God and Tu Di Gong adjacent to the entrance adding a touch of old-fashioned and homey feel.

Since the executive chefs at Seventh Son originally worked at the Japan and Shenzhen branches of Fook Lam Moon, we had high hopes that the quality of food would live up to its fame. We started our meal with two appetisers: the chargrilled crispy pork belly is hands down one of the best we have had for a while, featuring five alternating layers of flavourful pork and decadent fat beneath the crunchy and perfectly caramelised crust, and each mouthful is heavenly. Yet, the deep-fried sliced pomfret served with mayonnaise is a surprising let-down as the fish is both overcooked and under-seasoned, while the mayonnaise fails to compensate for its dry texture and dull flavour; to add insult to injury, the dish features a price tag of HK$330. Hoping to try out more dishes, we ordered only one stuffed baked crab shell between two; this soon proved to be a huge mistake as it is a brilliant signature dish that you would not want to share – think succulent crabmeat with shredded onions under a golden brown layer of deep-fried breadcrumbs in a crab shell. Then there was a 20 minute wait before the other dishes arrived. The home-style steamed pork mince with salted egg, neatly cut into eight parts by our server, is just average in terms of taste and texture. We also ordered a historical dish evolved from royal cuisine – steamed sandwiches of boneless chicken with Jinhua ham and shiitake mushrooms – which takes 45 minutes to prepare after ordering. The appearance is impeccable, featuring slices of chicken, ham and bamboo shoots (replacing shiitake mushroom) arranged orderly in a sea of thick sauce. The dish is of generous proportions and even half of it is enough for three to four to share. While the chicken is delightfully juicy and fresh thanks to its subdued seasoning and the bamboo shoots has a nice crunch, the ham is less successful, being way too salty and tough, and the chopped ginger is unnecessary condiment; perhaps a signature crispy chicken would have been a better option. In our opinion, no meal is complete without carbs, and so we ordered yin-yang fried rice as our final dish. We enjoyed the tangy tomato and the creamy sauces and the fried rice is deftly executed – it is fluffy and moist after absorbing the sauces, yet not soggy.

Like many traditional Chinese restaurants in town, wines are not their main focus. Seventh Son has a compact wine list with a limited collection of reds and whites mainly from Italy and France, champagnes, cognacs, whiskeys and Chinese liquors available by bottles, and only a handful of items are available by glass or by half-bottle.

Right from the moment we entered the building we were greeted by a concierge to the elevator. Services are attentive but not intrusive. It was never hard to get the attention from the experienced waiter. Though they missed one of our orders, they were able to rectify it swiftly.

A sumptuous meal for two comes to around HK$1,500. While not for those looking for inventive Cantonese cuisine, Seventh Son is a perfect spot for classy Guangdong delicacies. Given the convenient location, quality food and good service, we think the price is acceptable.