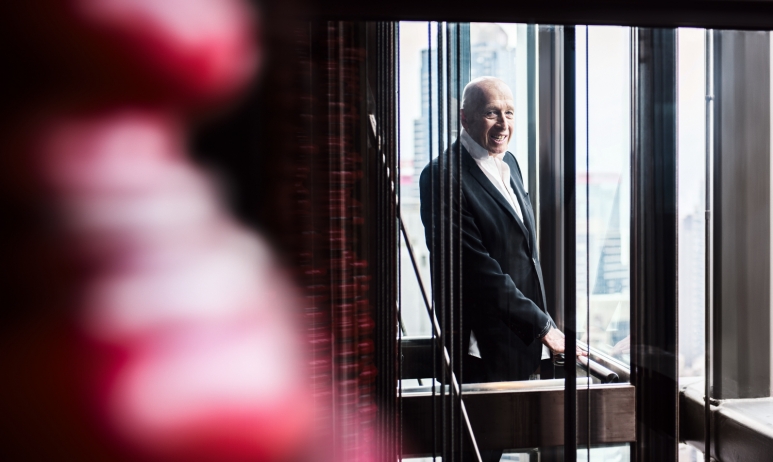 Allan Zeman is founder and chairman of the Lan Kwai Fong Group. He holds various board positions at numerous companies listed on the HK Stock Exchange and also contributes a large amount of time to government services. Zeman, who is part of the Tatler 500 list, has lived in Hong Kong for 45 years and has been a holder of Chinese Nationality since 2008.

The nightlife in Lan Kwai Fong is as vibrant as ever but nowadays there is so much more variety. In the early days, the scene was dominated by three clubs: Disco Disco, followed by Club 97 and then California. Many young people who came to party went on to become movie stars and singers. The bar scene has also diversified and expanded hugely—from Tiki lounges to Victorian speakeasies, the variety is amazing.

Back in the day, the only good restaurants and bars were in the hotels. You had to wear a tie and jacket to get in. I was in the fashion industry and I had designers and buyers coming to visit—and now they don’t even wear socks, let alone a tie and jacket.

"I thought, New York has Soho and London has the West End, why can’t Hong Kong have something similar? That’s when I decided to open the restaurant California in Lan Kwai Fong."

The major development in the dining scene in the past 20 years is the use of technology. In the old days, people picked a restaurant based on word of mouth; nowadays people’s dining behaviour is really influenced by the internet and online reviews. Soon your meal will be selected for you using AI, and will be served to you by a robot and paid for on your phone.

See also: 5 Robots Making Their Way Into Your Home

The restaurateurs and bar owners are more international nowadays and the surge of European chefs over the past 20 years has really elevated the dining scene—from Richard Ekkebus opening Amber 12 years ago, to Umberto Bombana introducing world-class Italian cuisine with 8 1/2 Otto e Mezzo, and Jason Atherton and Yenn Wong creating a culinary splash with the opening of 22 Ships, Ham & Sherry, and Aberdeen Street Social.

In the next 20 years, Hong Kong should be a smart city that not only attracts young talent but also attracts some of the bright minds and companies in the world. As a city, we will achieve strength by becoming a part of the Greater Bay Area, which will help the integration of China and Hong Kong.