Coasteering: The Eco Adventure Sport You Need To Know About 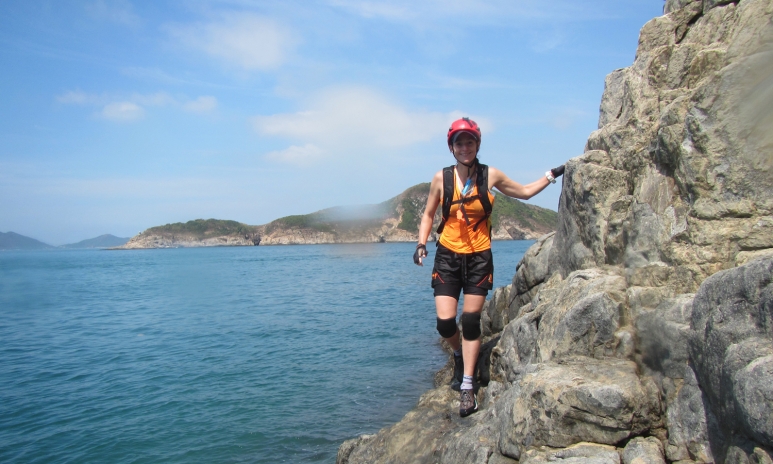 Most couples enjoy candlelit dinners or a night on the sofa when they’re spending time together, but Esther Röling and Paul Niel are no ordinary couple.

Coasteering their way around 80km of coastline—that’s rock climbing, leaping, jumping and swimming, keeping as close to the water’s edge as physically possible—the adventurous duo are taking on Hong Kong Island’s coastline in an ambitious yet fun eco-project, Round The Island.

We chat with Esther about their upcoming adventure, and why this project matters to Hong Kong.

What is Round The Island?

It’s a multi-day expedition to travel around Hong Kong Island’s coastline, with an aim to highlight environmental issues. Coasteering offers a new perspective on this ecosystem by exposing us to a lot of the remotest coastlines in Hong Kong. The project aims to create a detailed map of Hong Kong Island’s water pollution. 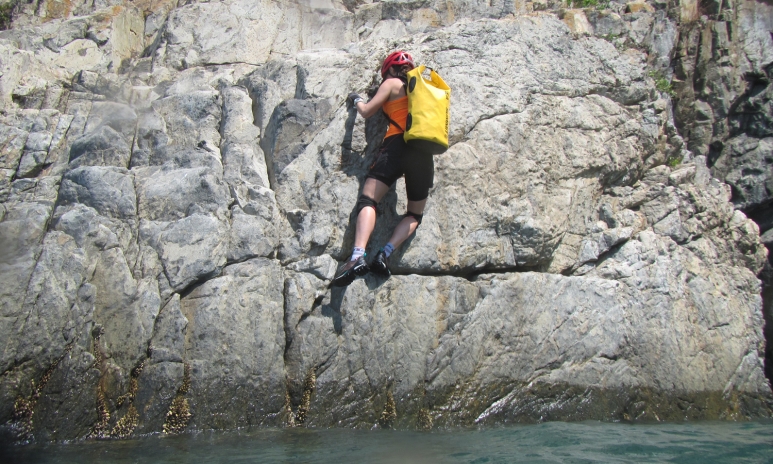 Why is a project like this important for Hong Kong?

Hong Kong Island uniquely packs an urban metropolis with really wild countryside, and that is very visible on the island’s coastline. We have amazing beaches, stunning sea caves, steep cliffs and one of the busiest harbours in the world. Around the coast you can really see the evidence of human life on the environment: polystyrene, tires and plastic washing up on the shore.

Open University will use the data we collect on our journey to run a study that hopefully gives new insights into plankton, algae and pollution levels in the water. In addition, we are hoping to organise a few school visit events together with the Royal Geographic Society. Local schools will visit us during our challenge and we will share with them some of the findings.

How many of you are doing the expedition?

The climbing team is my husband and myself. We have a filmmaker who will shoot a documentary about our expedition. We also have a great support team that will help us with all sorts of questions—medical and logistics, that kind of thing.

We are getting supported by members of the Hong Kong chapter of the Explorers Club, and the Royal Geographic Society helps us to connect with local schools. People will be able to see our progress and what’s happening through our Facebook page . 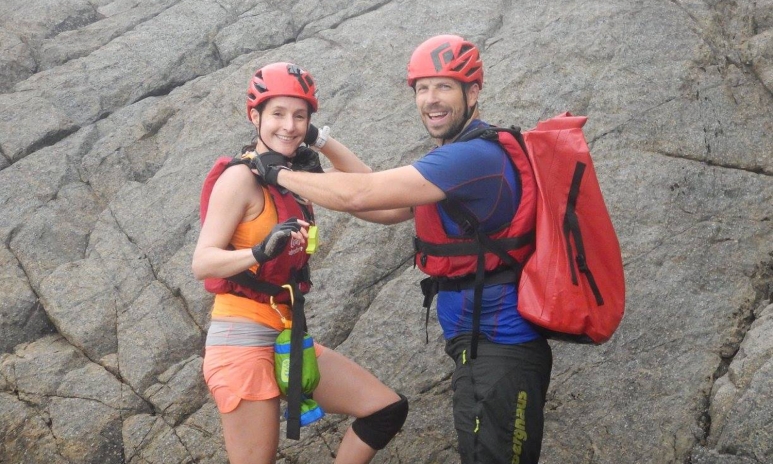 The Round The Island Team, Esther and Paul (Photo: Courtesy of Esther Röling)

How are you preparing for the trip?

At the moment we are doing a lot of training. We go out every day to scout the coastline, climb, run or do strength training.

What are the challenges of this expedition?

The trip is going to be a very tough endurance challenge—we think the total climb will take us around a week. We have to factor in potentially bad weather conditions, like ocean swell, big waves and stormy weather, which can make this a very dangerous undertaking. There are also sharks, sea snakes, jellyfishes and sea urchins, which we had a very close encounter with yesterday.

Besides the physical challenge, it will also be a mental challenge. The hardest part may be knowing that we’re just a cab journey away from home—it will be tempting to head home to our 15 month old daughter, especially when we’re tired or injured.

What’s your favourite part of coasteering?

Personally, I love to be out in nature. Coasteering is an amazing combination of sports that I like— climbing, swimming, jumping and endurance. I feel like a kid again. My least favourite part is the gear—it’s not exactly glamorous.

Have you ever gotten into a tricky situation?

When we had just started coasteering, we didn’t really appreciate the dangers it could involve and were therefore totally under-geared. One day, I got swept off a cliff by a massive wave and had serious problems getting out of the water due to the swell and the razor-sharp barnacles on the rock. Luckily, Paul had a rope with him and managed to tow me out. It definitely gave me a lot more respect for the sea.

For more society news straight to your inbox, sign up to our weekly eNewsletter.