Diana Zhang On Art And Ambition

By Chloe Street May 02, 2017
Born in Mainland China when luxuries were strictly forbidden, Diana Zhang was a businesswoman, wife and mother before she found her professional calling

Diana Zhang On Art And Ambition

Try to commission a piece from bespoke jeweller Diana Zhang and, unless she already knows you, you’ll probably be politely declined. Even if you’re a friend, or a friend of a friend, she’ll refuse to sell you a piece of jewellery if she doesn’t think you’re a good match. 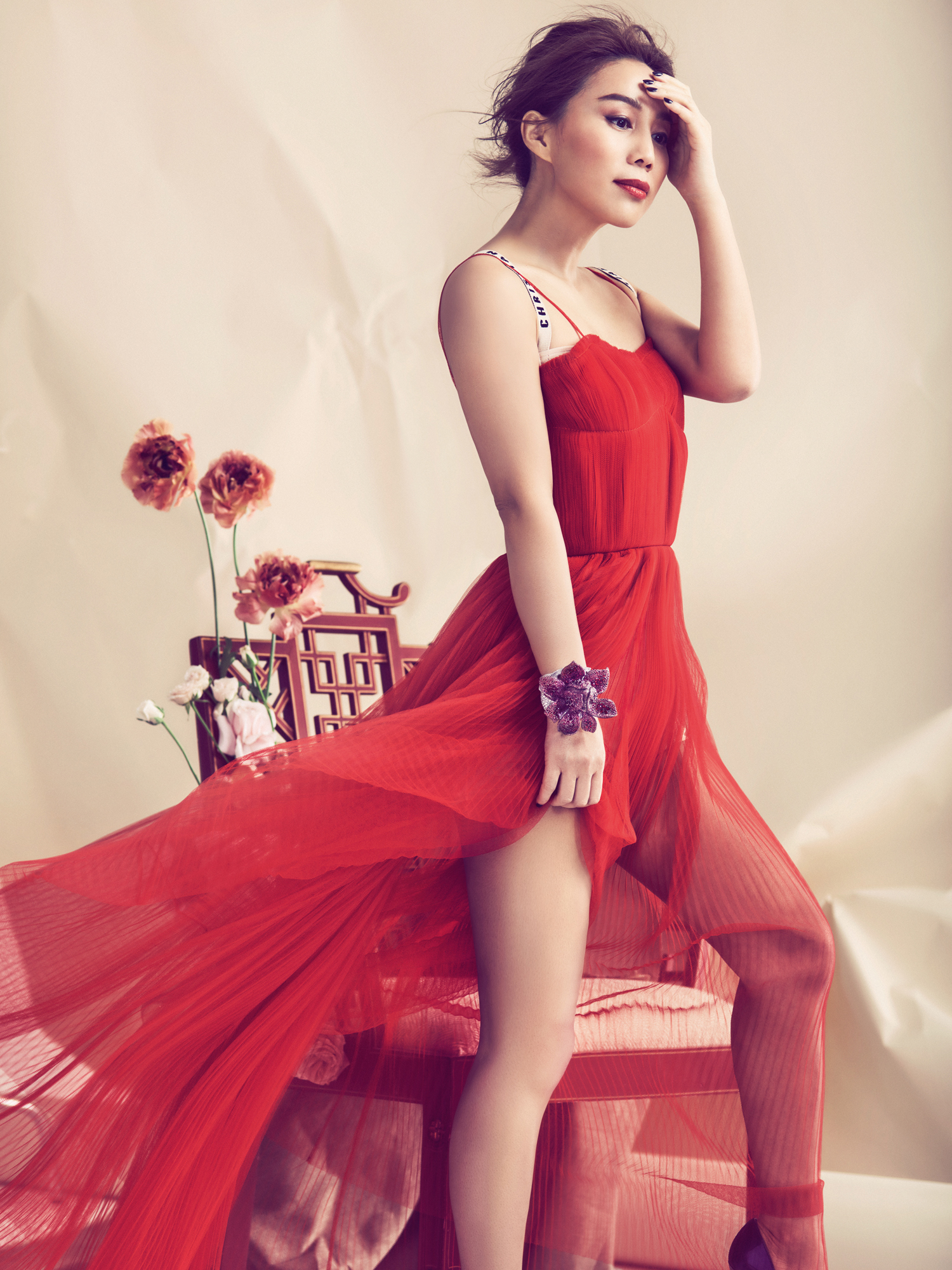 “My pieces are not like other art that you just hang on a wall; they need a woman to show them and so it’s important who that woman is,” she says. “If a person is not the right fit, I will not sell to them.” And given the complexity, flamboyance and prices of Diana’s incredible sculptural works, it’s clear that only a select few can be perfect fits for these beautiful showpieces.

On the table in front of us in Diana’s elegant office on Wyndham Street is her latest creation, the Red Lotus cuff. She spent two years designing and personally sourcing more than 100 natural, unheated Burmese rubies for it before the workshop she uses in Central spent a full year realising her design.

The elaborate, fist-sized flower is unique, can be detached to form a brooch (such versatility is a common feature of Diana’s work) and is made of titanium to keep it light. It is quite unlike any piece of jewellery I have ever seen.

Mainland-born Diana moved to Hong Kong in 2002 and founded her business in 2012. Her first clients were friends, who in turn introduced their friends, and things grew organically from there. In 2014, Diana was invited to present her One Year in China collection at the Biennale des Antiquaires in Paris, the first female Chinese jewellery designer to be invited to participate in the exhibition. The collection, whose theme draws together the four seasons, blends traditional Chinese culture with Western techniques and was well received.

The 40-year-old designer takes the approach of an artist to her work, and makes just three or four large pieces of jewellery and 10 to 15 smaller ones each year. Some items, such as the Red Lotus cuff, she creates simply because she wants to, but most of her work is the result of commissions. 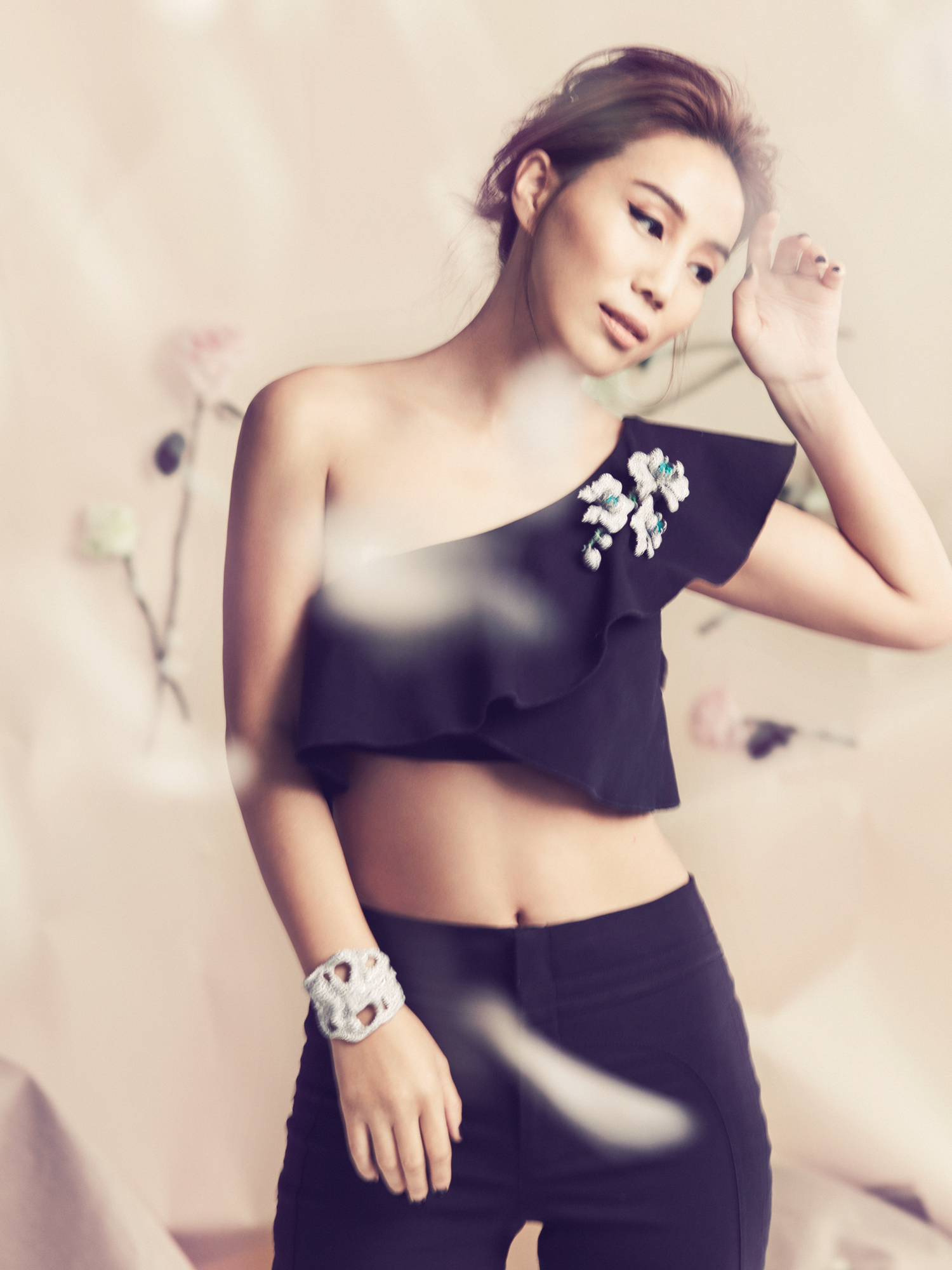 These begin with Diana having lunch or dinner with the client to hear their story and “find out what really touches them.” Pieces take her a minimum of six months to create, and often two or three years for the larger ones.

Her clients are from around the world (Diana has a dealer in Paris and one in New York), and are “mostly quite low-key, very private,” she says. “They are not the sorts you see in the press. They wear the pieces at special parties, on yachts or in private homes, not out and about.” With prices starting at HK$500,000 and having no limit, such security seems prudent.

See also: 7 Stunning Jewels to Wear Your Heart on Your Sleeve

Clients often ask for smaller, more affordable pieces—and “I try, but they always come out like this,” she says, gesturing to a gargantuan knuckleduster of a flower ring dripping with diamonds that comes in at a cool HK$1 million.

“Each piece I make, I don’t count how much it will cost. I just make and make and spend and spend until it’s finished.”

Diana was not always the creative mastermind she is today. Born in the northeast, near Harbin, she was raised modestly. “We were not rich. Nobody was then,” she recalls. But as the country began to open its doors, the family—a teenage Diana and her three older brothers—moved to Guangzhou to expand their parents’ media production and licensing business.

Diana worked for the family company for eight years after finishing school, and exposure to the Western magazines, books, films and CDs that came through the import business helped nurture a love of fashion and art.

“I always thought I wanted to create something but I never had the chance,” she says. It was not until after she met the man who would become her husband, Steven, that Diana discovered her talent for design.

The pair met by chance—and instantly became an item—while both doing business in Shenzhen. Steven, a Beijinger based in Shenzhen, proposed after just three months. “He gave me a small ring and said, ‘If you want to marry, we can.’ He asked me to marry him so many times,” giggles Diana. The 22-year-old felt she was too young to marry. She accepted the engagement ring but didn’t wear it, stashing it in her safe instead. 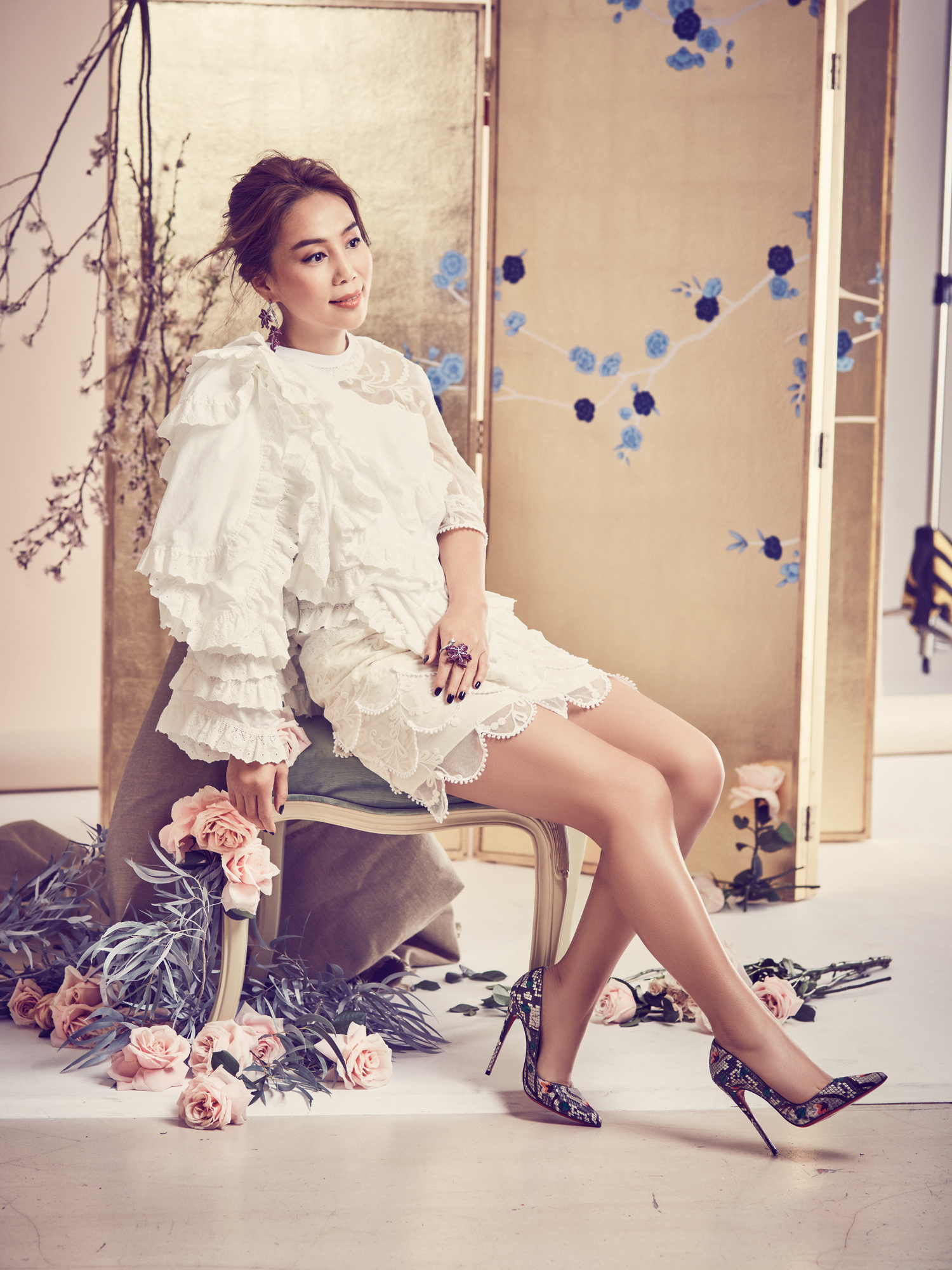 “When he gave me the ring, it felt very Western. At that time in China, everybody was still so poor after the Cultural Revolution; the idea that you would give someone a ring when you got married was still quite new, so it felt strange. I’m a person who likes to work, so I worked a lot. I didn’t think about family or anything.”

Steven, meanwhile, continued to wear his engagement ring. “Six years later he was still there, so I thought, ‘Okay, he’s the one to share the rest of my life with.’” Diana and Steven married in 2004 and welcomed their son in 2007.

It was her husband’s support, Diana says, that gave her the confidence to quit the family business and devote herself to designing jewellery full time. A trip to Paris with a friend in 2010 to take a short course in fashion design had inspired her.

“I found my dream again,” she says. “I had lost it for a long time; I just thought, ‘Okay, life goes this way.’ I had given up already. But in Paris I realised this is my dream, to create something. I really love it.”

So Diana then went on to study diamonds and coloured stones at the Gemological Institute of America before setting out on her own as a jewellery designer in 2012.However, starting out as a 34-year-old mother with no experience or contacts in the industry wasn’t easy.

“Most of my friends and family thought I was crazy. In the beginning, it was only my husband who supported me to follow my dream.”

For Diana, each piece she designs must have a story and a meaning. This philosophy was instilled in childhood, when the only jewellery she was exposed to was a pair of plain silver bangles belonging to her grandmother. The possession of luxury items was strictly forbidden at the time and was very risky, but her grandmother, who had been given the jewellery by her mother on her wedding day, kept the bangles hidden and would bring them out each Chinese New Year for the children to marvel at.

“I remember my mum and all the aunties wanted to inherit those bangles,” says Diana. In the end, her brother’s wife was the lucky one, but the other women in the family felt the gift was wasted on her. “The silver wasn’t valuable and she didn’t understand that they represented something beyond material value; it was love, it was culture, it was memory.”

For this reason, Diana has a real sense of responsibility when creating jewellery. “You have to make it the best it can be because when someone buys the piece, it is suddenly beyond my control what happens to it, and it becomes part of their life and their children’s life. It’s not just a product, not just a vehicle for making money. You have to put your heart into it so that it lasts a long time.” 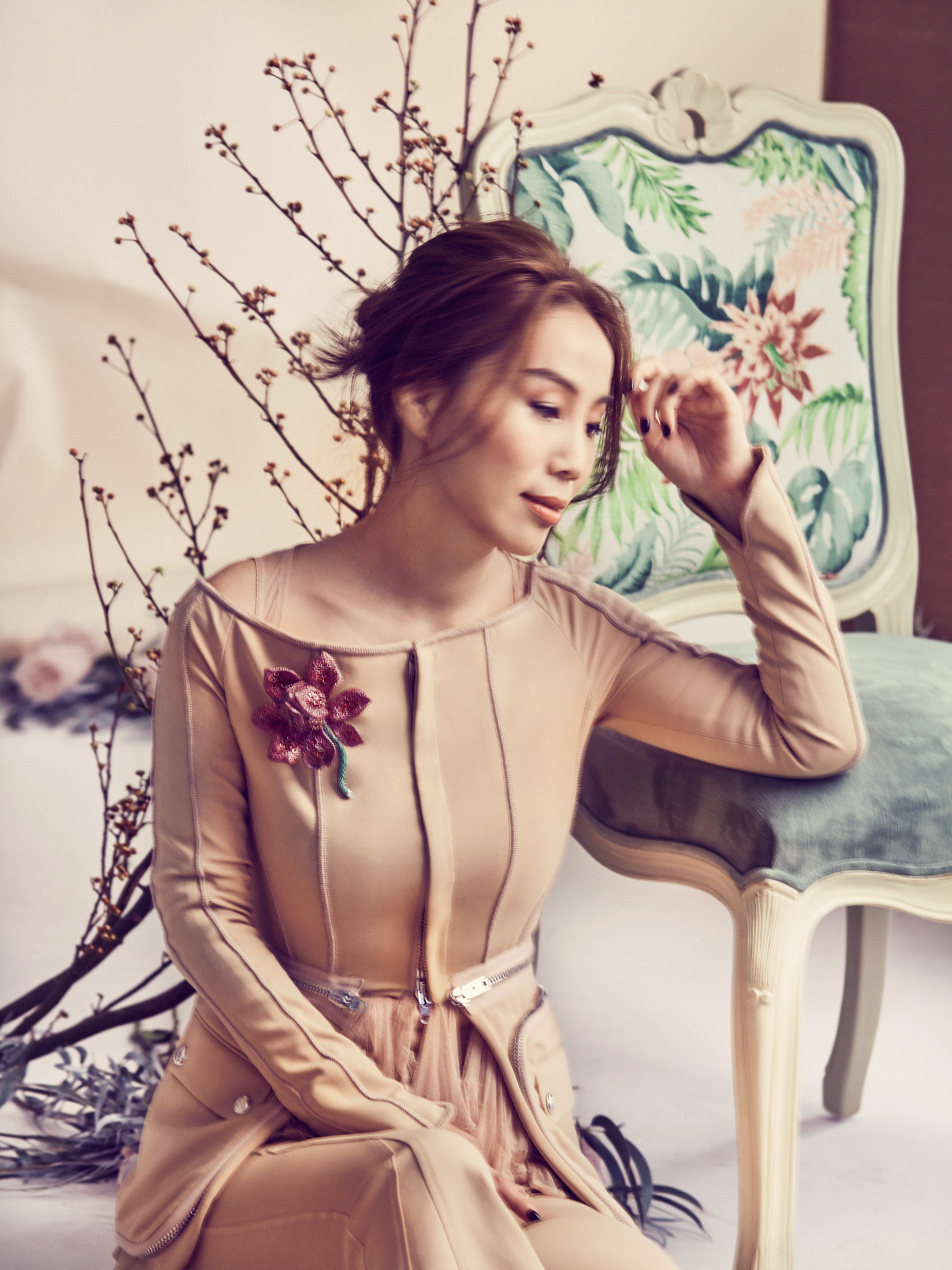 She’s just as particular when it comes to what she herself will wear. “Now that I know jewellery more, I can’t wear someone else’s design.”

And that goes for her wedding ring, which she wore for the first year of marriage but then returned to the safe. “I don’t want a gold band like everyone else has. I have my own ideas on love.” She plans one day to craft matching rings for Steven and herself, but for now the design is still pending—she’s determined it should be perfect.

When not immersed in her latest creative endeavour, Diana, a regular churchgoer, loves to hike in the country parks with her family, a pastime that helps inspire her nature-themed designs. She has also embarked on the first year of a three-year bachelor’s degree in fine art from RMIT University in Melbourne, for which she studies two evenings and one day a week. “I want to learn painting and sculpture in order to develop my own techniques,” she says.

“Every artist needs to create a revolution, change something to benefit the industry. I’m still working on it, but I want to keep learning and expanding my vision.”

While her creativity is reaping rewards, Diana has no ambition for her brand to enter the realm of big business. She would never relinquish artistic control and stresses that her purpose is “not to make money but to follow something in my heart, my dream.” In an ideal world, she wouldn’t even be in business. 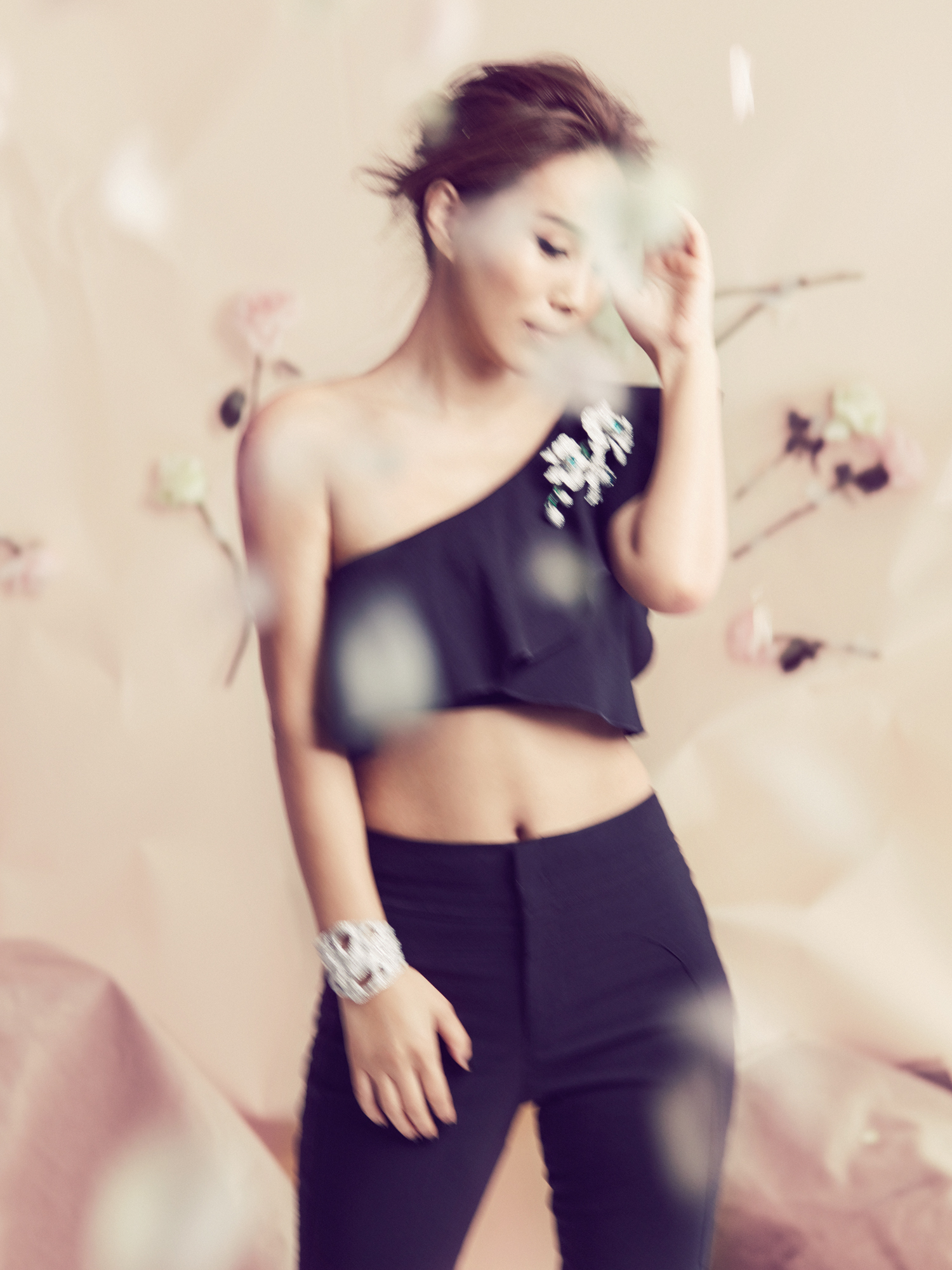 “I wouldn’t mind if I spent my whole life carrying these pieces around with me. I would rather keep all of them, but I have to sell some to keep the business turning over.” Her jewellery is priced “to cover costs, and not more,” and she hopes that years down the line her collectors are able to take her pieces to auction and “make lots of money.”

So for those lucky enough to be invited to view the Red Lotus cuff, there may just be a lucrative investment in the offing. But, first, Diana must select the right potential clients—women who would look good in the piece, attend the right events and have the wherewithal to purchase it. A tricky task perhaps. Yet, as Diana so perfectly puts it, “You don’t need a lot of people. You just need the right ones.”

Like this story? Sign up to our weekly eNewsletter to get the latest society news straight to your inbox.

See also: Kent Ho On Startups And The Future