Rhythm of Life: The Love Story of Kingston Chu and Kelly Lo 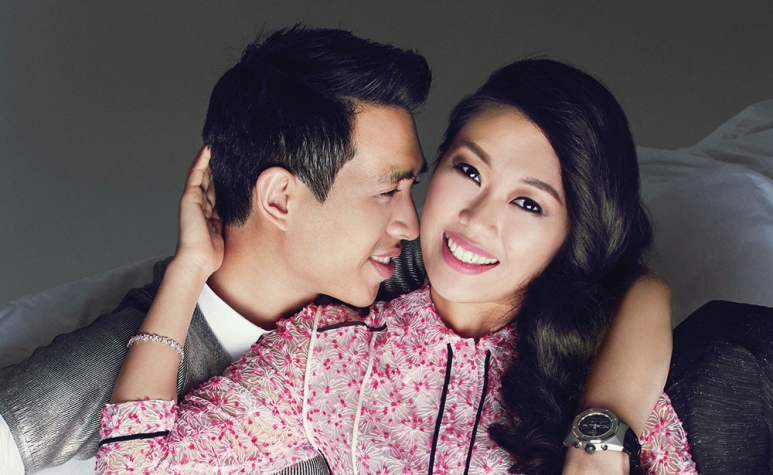 In a way, it took a tragedy to bring Kelly Lo and Kingston Chu together. While Kingston grew up in Hong Kong, Kelly was born and raised in Los Angeles. Her family had no plans to leave the US, but the death of her father when she was 10 prompted her mother to move back to Hong Kong with Kelly and her brother. Kelly was soon enrolled at the Hong Kong International School, and it was there that she met her future husband.

Kingston believes they were destined to meet. There were plenty of signs, says the vice-chairman and managing director of luxury watch retailer and distributor Sincere Watch. For example, Kelly’s mother’s name is Sincere, 1031 is the stock code of Kingston’s family business in Hong Kong, and Kelly’s mother’s birthday is October 31. Even Kelly’s phone number includes 1031, Kingston reveals.

The couple tied the knot in November in front of 200 guests at the Four Seasons Resort Koh Samui, Thailand. It looked like it was going to rain on the day, but the ominous clouds held back just long enough for Kelly and Kingston to exchange their vows. “While walking down the aisle I remember the light wind and moisture in the air, which made the veil stick to my face,” Kelly says, laughing. “I couldn’t wait to get to Kingston at the altar and have him take the veil off.” 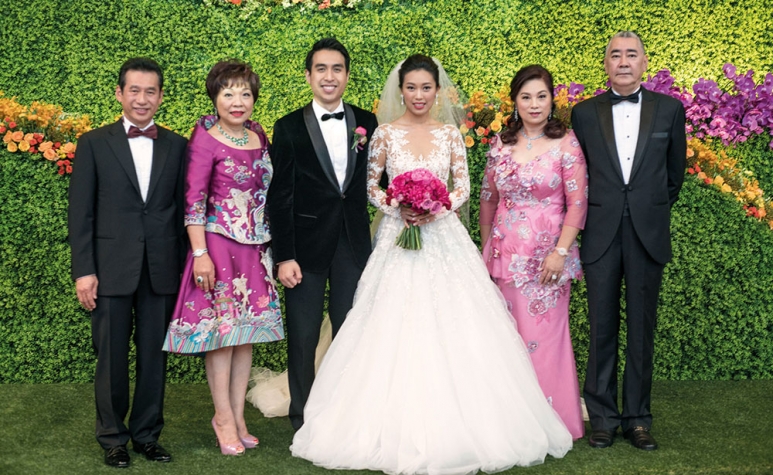 That beachside bash was followed by a more extravagant gathering at the Hong Kong Convention and Exhibition Centre, where 2,000 guests celebrated the couple’s love in the midst of an enchanted forest inspired by Alice in Wonderland.

The marriage is the culmination of an eight-and-a-half-year courtship that saw the couple endure long periods apart, with Kingston studying at the University of Southern California while Kelly pursued her degree at the Parsons School of Design in New York. Kingston’s mother, Pollyanna, had even despaired at one point, warning him, “There’s a low probability of couples getting married after five years together,” but she need not have worried.

The couple’s love story began when the ever-practical Kingston, four years Kelly’s senior, chose her as his partner at their high school dance club, for the simple reason that she was the smallest in the class and would thus be the lightest and easiest to partner with for swing dancing. It was not until four years later, after Kelly graduated from high school, that their relationship became official. “It was unspoken,” Kingston says, “but there was a connection.”

For their first dance as a married couple, they grooved to Benny Goodman’s version of Swing, Swing, Swing, the song to which they had first danced together at school. They were accompanied by Kelly’s students from Yip’s Children’s Choral and Performing Arts Centre, which was founded by Kelly’s family and was where she practically grew up. 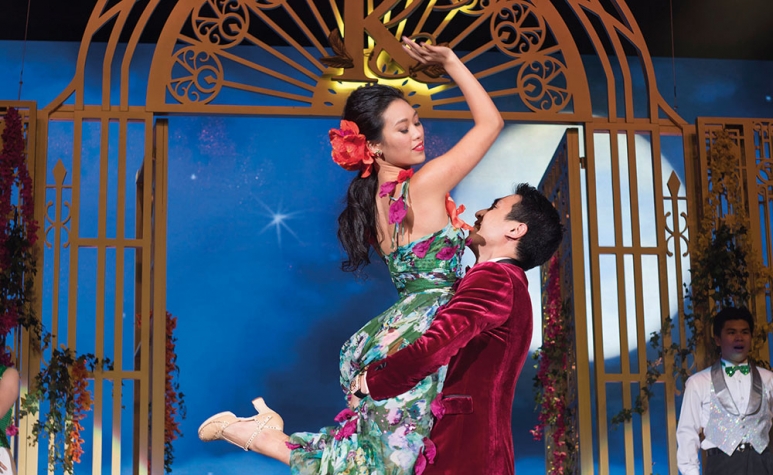 Dance, music and drama play an important part in their lives. Even Kingston’s proposal to Kelly was tied to her love for the performing arts. Kelly had been playing the role of Beauty in the centre’s “professional amateur” reproduction of Beauty and the Beast and, after the last bow, Kingston surprised her (and the entire audience and cast) by dancing onto the stage and singing Can’t Take My Eyes Off You. “I really don’t remember much of it, until I was already down on one knee,” says Kingston. “I basically blacked out in the middle because of nerves.” Kelly smiles, “All our performers were crying—perhaps more than I was!”

Despite coming from different backgrounds and choosing unrelated vocations, the couple’s temperaments are quite aligned. Muses Kingston, “To be honest, it’s been very steady with us.” Kelly agrees: “Yeah, we don’t really argue. We are tolerant, patient and easygoing. You need to be flexible for a relationship to work; it also happens that our personalities work well together. I feel like we sometimes don’t even have to try, so we are very blessed.”

Kelly is an award-winning interior designer and head of her own eponymous design firm. She has worked on various residential and hospitality projects, including the Casa Real Hotel in Macau. Kingston is the scion of the Chu family, which founded the Kingston Financial Group, a Hong Kong-based, publicly listed company. His mother acquired the Sincere Watch Group and its Franck Muller operations in Asia (excluding Japan) in a US$162 million deal in 2012.

Two years ago, the couple collaborated on the Franck Muller maison in Hong Kong, with Kelly as design consultant. “It was the first time we sat in a professional capacity together. It was easy,” Kingston recalls. “She gave a lot of input in the overall aesthetics and visual merchandising.”

Kelly adds, “Kingston is a very fair person. Just because I was his girlfriend at that time didn’t mean he would immediately do what I said. He listens to his other directors and respects their opinion before coming up with his own. That’s something I admire about him. He can clearly see what’s right and what’s wrong. Even if there’s no right or wrong answer, he will dissect the situation and be fair to everyone.” 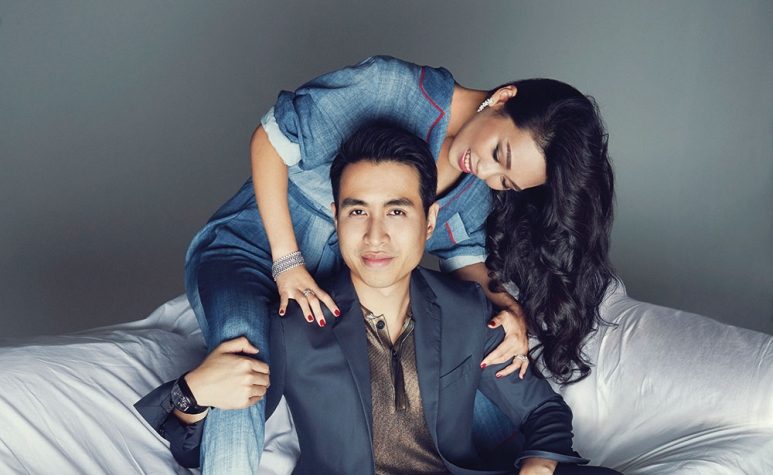 When the couple are not working, they bow to their wanderlust. “Travelling is great for a relationship as you discover new things together,” says the softly spoken Kelly. “The experience helps you bond.”

In 2014, the couple travelled for 36 hours from Hong Kong to Bolivia’s Salar de Uyuni, the world’s largest salt flat. As Kingston whips out his phone to scroll through awe-inspiring photos of the duo surrounded by the reflective surface of the shallow sheet of water covering the vast salt plain, Kelly enthuses about their Bolivian adventure, during which she even found the lack of electricity and water after a certain hour charming.

“It’s at a high altitude, so you have to take pills every day,” recalls Kingston. “Even the two steps from the room to the sink made us feel out of breath and light-headed. Everything was extra slow—and there was no yelling. That’s the key. I’m thinking of moving to Bolivia,” jokes Kingston. Kelly instantly retorts, “Baby, I don’t yell!” India, the Galápagos Islands and Kenya are other destinations high on their bucket list.

For now, the biggest challenge facing the couple is whether they should welcome a third dog into their family. Throughout our interview, Kingston has been trying hard to persuade his wife to let him have another pooch. He even refers to the future dog as “Christmas,” hoping to catch her out when she says, “I don’t want Christmas!” We think it’s safe to say the couple is destined for many happy Christmases together, with or without a third canine.