Victoria Beckham on Career, Family and Her Hong Kong Muses

Her eponymous label is loved from London to Los Angeles, and she has just opened a stand-alone store in Hong Kong, her first outside London. Victoria Beckham talks to Hong Kong Tatler about the challenges of juggling family with a fashion empire 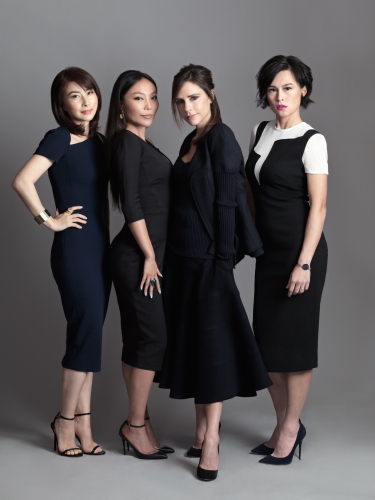 When it comes to designing clothes, there is one woman Victoria Beckham holds firmly in mind. “You know, it’s me,” she says, matter-of-factly. “It’s someone that travels a lot, someone that likes and appreciates luxury, someone that wants to look like the best version of herself. I would say that is me.”

Simple it may sound, but it’s clearly a formula that works. Having launched her own label eight years ago, Beckham now sits at the helm of a global fashion brand, one that reaches from London to Los Angeles, and she has just opened her first store outside London right here in Hong Kong’s Landmark in partnership with Joyce Group. Instantly recognisable as her own best advert for her line in sharply cut dresses and luxurious, sleek shapes, she exists today as the embodiment of that brand, whether she’s being seen on the red carpet, the school run or heading through yet another international airport, children in tow, as she criss-crosses continents with world domination in sight. A globe-trotting, entrepreneurial 42-year-old mother of four, she is the VB woman. For Beckham, this is an endeavour that is deeply, deeply personal.

"Women can relate to me. I’m being very honest, and I know what women want."—Victoria Beckham

It has always been that way. “I’ve always loved fashion,” she explains over the phone from her London studio, just back from a whirlwind trip that took in her launch in Hong Kong, appearances in LA and some family time there over her birthday—all communicated to her 10 million followers on Instagram, 30 million across all social media channels. “It’s how I express myself creatively. Women can relate to me. I’m being very honest, and I know what women want. I always dreamed of having a store. I always wanted to be an international brand that reached out to women all around the world.”

Those dreams have more than come true, as have many others for Beckham, whose story is the stuff of showbiz legend. As one of a troupe of ordinary girls who formed a band in Britain in the 1990s, introduced the world to the concept of Girl Power, sold some 55 million albums and then moved on to new pastures, all by their late 20s, her tale is entwined with a particularly starry brand of female success.

Marrying the world’s most famous footballer and producing four children along the way, she has, in the decades since, repositioned herself from pop star to brand and businesswoman, gaining plaudits from a once sceptical fashion industry and a global following. She and husband David have earned a fortune that makes them richer than their own queen and yet her work ethic is legendary—as is the dedicated fitness regime that’s key to maintaining the VB look. It’s all part of a path that’s led her here, her status as a champion of fashionable working women and a modern style icon cemented. And, as much as she exists as the pinnacle of both, her brand appeals to a similar type.

She has, in the decades since, repositioned herself from pop star to brand and businesswoman, gaining plaudits from a once sceptical fashion industry and a global following

As such, it tends to not be just any old fashion follower that Beckham speaks to as she designs each season, delivering multiple collections across a main line, sister line, sunglasses, denim, accessories and just announced make-up line with Estée Lauder to customers who pounce on them from California to China. She quickly established herself as the go-to brand for a slice of professional chic. As she puts it, “I’m a busy working mother, and I think my customers are all of the above.” When it came to choosing who to feature with her in this photo shoot, she was clear about what she wanted: modern women who reflect what brand VB stands for. Add multitasking, high-achieving and stylish to the mix, and you have the formula that led to this, our exclusive shoot featuring Victoria with Gigi Chao, Bao Bao Wan and Guo Jingjing, three women who could not be more apt as muses for her vision. 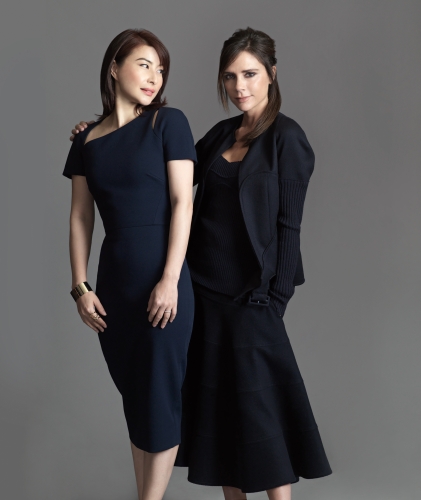 “I think she has become a role model and many high-achieving women share her same values and ambition,” says Jingjing, the former Olympic diver turned stylish Hong Kong mother, a woman who knows a thing or two about reaching the top of your game.

For businesswoman Gigi, another high-flier with a household name, her appeal is even more personal. “I think I am inspired by Victoria in the sense that I know what it’s like to want to demand something more of one’s life and one’s achievements,” she explains. “Going from being a Spice Girl to being Mrs Beckham and part of a super high-powered couple, and now, beyond all the headlines and the press and publicity, to want something more from life and to strive to create something beyond just your name is really impressive. And I think she’s really done it.”

Jewellery designer Bao Bao, a fan since the start, agrees. “I’ve collected her dresses from the beginning, and while her style has definitely evolved, the spirit stays the same. You have to be a self-disciplined woman to wear Victoria Beckham. It takes a certain gesture of elegance to carry her dresses off; she almost asks of her clients to be how she is in her life, to remain graceful and elegant.” 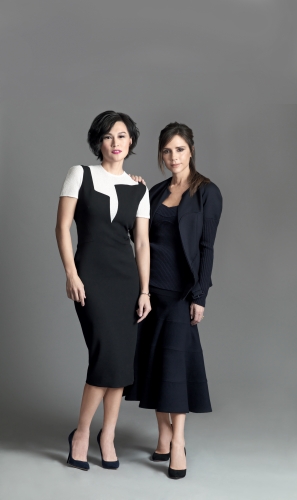 For Gigi, in fact, Beckham’s name isn’t even the main draw when it comes to her fashion. “I think it’s really just a beginning in terms of inviting women to engage with her fashion. The clothing she’s creating is really quite an experience in itself in terms of its colour, fit and detail, and the eveningwear is outstanding. Women really should visit the store and engage with the clothes themselves.” What those women can expect to find is something sophisticated, understated, elegant and undeniably modern—and the best proponent of the look is Beckham herself. Gone are the days of the tight dresses and YSL Tributes, as Beckham’s own look has changed over her time as a designer. “When you look at pictures, you can see it’s quite obvious how my personal style has evolved,” she says. “I’m older. I suppose I’ve grown in confidence through being older, and while when I first started we designed just 10 dresses, now we have separates, knits, tailoring, pants.”

"Fashion should make people feel good and confident. It’s just about being yourself, not trying to be anybody else, not being too hard on yourself. It’s celebrating who you are."—Victoria Beckham

These days, with Beckham as likely to be seen in one of her own chunky knits, some slouchy trousers and an (albeit immaculate) pair of trainers as in one of her signature dresses, the VB vibe is rather more relaxed than it used to be. See her here in Hong Kong at the intimate dinner held at Duddell’s to celebrate the opening of her store in a simple black tux, or meeting her customers in Landmark in a turtleneck, midi skirt and black pumps, and the departure is clear. Her considerations today are as practical as they are aesthetic—and her brand readily reflects that. “Fashion should make people feel good and confident. It’s just about being yourself, not trying to be anybody else, not being too hard on yourself. It’s celebrating who you are. I’m designing what I need. I’m a busy working mother and I travel a lot, and I can definitely pull from that.”

Her life as a mother informs Beckham’s approach in many more ways than one. “I’m inspired by my family,” she says, speaking warmly of life at the heart of a troupe of six, all of whom can be seen each season at her shows, cheering her on from the front row. It’s another reason women respond to her so well, seeking her out as an example of someone who actually is having it all. “Starting a fashion business is hard enough but, for me, I think her greatest aspect is how she manages to balance a career in the fast lane while still being a family-orientated mother of four,” says Jingjing. “It’s like a miracle,” laughs Bao Bao. “It’s just incredible how she’s maintained such a big career and managed a family, and made it so loving and together. If you look at the entertainment industry or at entrepreneurs, you don’t see many others doing that.” 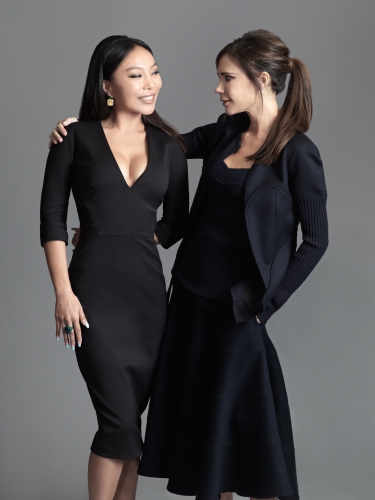 “The children will always be the priority and they always come first,” Beckham explains of how she keeps the show on the road. “I have somebody who helps me with my schedule, and I don’t actually travel that much, to be honest, because that’s time away from the children and it’s also time out of the studio. But my schedule is planned a long time in advance so I can afford to take that time out when I need to. And then, if I’m in New York doing the shows, my team is normally with me anyway, as are David and the children.” David is indeed right there with her, the other key ingredient in the power of brand Beckham. “We’re very equal, not just with our work, but with everything we do with the children. I think it’s great they know that Mummy goes to work and Daddy goes to work as well. We’re partners in business and in life, and I think we have a good balance.”

It’s a set of rules that work, allowing her to build a global business while simultaneously existing as one of the world’s most visible role models for working motherhood, and for all her talk of “learning along the way” and “organic growth,” it’s clear Victoria Beckham is in possession of some serious mettle. “I think it’s about being honest, being focused, working hard and dreaming big,” she says of the secret to her success. Given what she has achieved, they’re words worth listening to.