Boucheron has unveiled its latest collection of haute jewelry, "Bleu de Jodhpur," in homage to today's India, from cultural riches to architecture and humanism 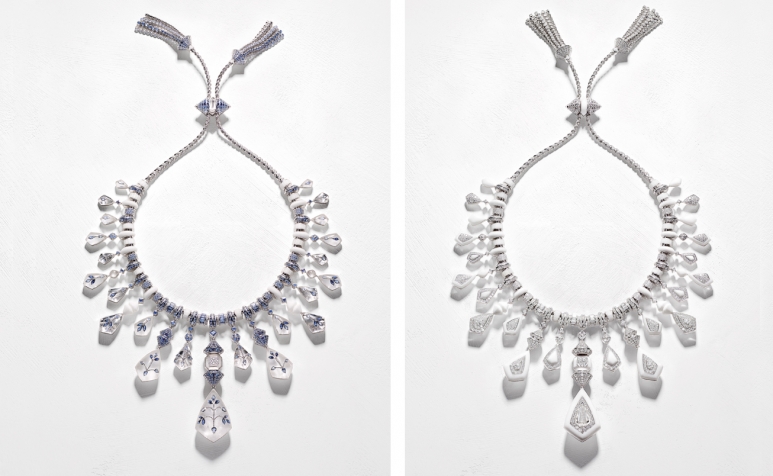 The centerpiece of this exceptional collection is a reversible necklace honoring the traditional ornaments of the Mughal Empire.

The "Bleu de Jodhpur" collection was born out of a meeting between Claire Choisne, creative director for Boucheron, and His Highness Gaj Singh II, Maharaja of Jodhpur, the Indian city often referred to as the "Blue City" or the "Sun City." In fact, it is under his patronage that the collection was unveiled.

"Bleu de Jodhpur" not only celebrates modern India but also the numerous links that unite the Parisian jeweler and the Sun City, as Boucheron has always had an affinity for India. Their story began with Louis Boucheron's first trip to the subcontinent in 1909. A never-ending source of inspiration, India has had a profound effect on the French brand's creations since then.

The brand has divided the new haute jewelry collection into four chapters, reimagining all of India's riches into exceptional pieces. "Jodhpur" is inspired by the hypnotizing blue of the building facades and the light of the city. "Indian Palace" pays tribute to the fortified city of Nagaur and the unique style of the Umaid Bhawan Palace. "Garden & Cosmos" draws inspiration from 17th century paintings from Jodhpur. And finally, "Maharani" celebrates femininity, especially through the traditional "Mehndi Night" that precedes a marriage.

The focal point of this collection of 60 jewels is the "Jodhpur Necklace," the first reversible item of haute jewelry. Perfectly symmetrical, this exceptional creation is directly inspired by a creation made by Boucheron in 1928 at the request of the Maharajah of Patiala.

This is why you'll find marble from Makrana, a precious material that was used to build the Taj Mahal, in several necklaces, rings and bracelets from the "Bleu de Jodhpur" collection. Boucheron also used sand from the Thar desert, specially sent by His Highness Gaj Singh II, to stuff into the center of the Nagaur necklace's rock crystal.