First Look at the Manus x Machina: Fashion in an Age of Technology

Ahead of a major exhibition of machine-forged finery at New York’s Metropolitan Museum of Art, we explore technology's influence on high fashion 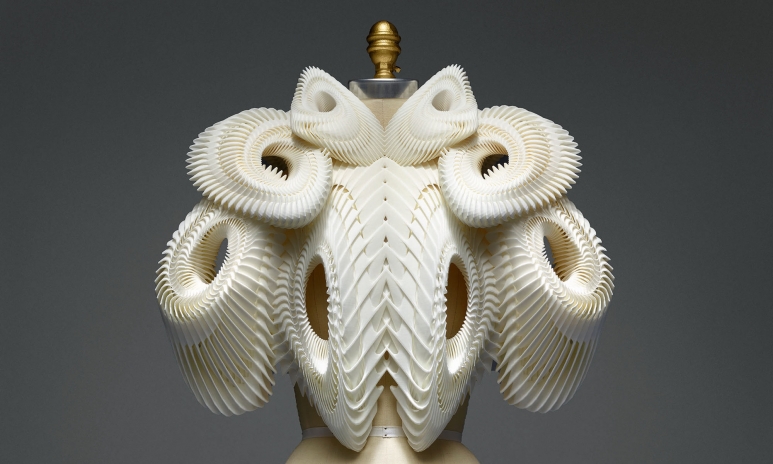 Prehistoric meets futuristic in this 2010 ensemble by Iris van Herpen

Wearable tech: hardly an expression that conjures up the most stylish of images. And yet, according to designers, brands and the most glamorous museum event of the year, technology is where it’s at when it comes to the forefront of fashion. It’s hardly surprising, really. We live in a world of shoppable runways and online retail, of Fitbits and smart clothes, algorithm-powered stylists and Hermès-designed Apple watches, one in which what we buy and how we buy it is inextricably linked with innovation in technology. What is new on the scene, however, is the adoption of the latest technological advances by the high fashion world, as designers from Chanel to Chalayan get in on the game. Technology is no longer simply affecting how we buy our designer items—it’s shaping how they’re made and what they look like.

It is this sea change that’s the subject of Manus x Machina: Fashion in an Age of Technology, the Costume Institute’s spring exhibition at the Metropolitan Museum of Art in New York, which opens this month. Dedicated to showing just how innovative the fashion world can be, the show features 100 creations ranging from an 1880s Worth gown to Issey Miyake’s Flying Saucer dress. As visitors feast their eyes on everything from a pleated skirt designed by Raf Simons for Dior in 2015 using a technique invented in the 1760s to an Iris van Herpen dress fashioned from laser-cut silicon feathers, they will see that the industry has arrived at a place where the best of the best often owes as much to the machine as it does to the hand.

All of these creations speak to a wider movement in fashion, one that is as full of fast-paced innovation as Silicon Valley itself. As the curators of the Met’s exhibition have been keen to point out, this is not something new. Not for nothing did the birth of haute couture coincide with the invention of the sewing machine. But for several years now, in ateliers from the most innovative start-ups of London’s East End to the traditional workrooms of Paris, the exploration of new techniques has been at the forefront of fashion’s mind. 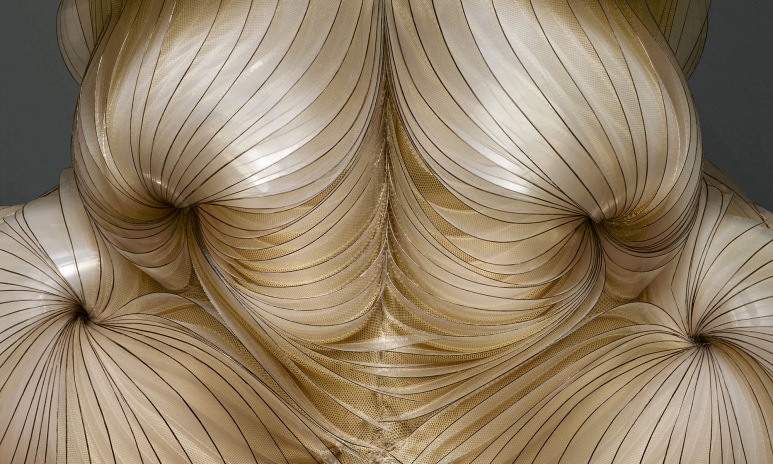 An Iris van Herpen dress from 2012

The first new technique off the blocks and into mainstream consciousness was digital fabric printing. Declared by The Wall Street Journal at the time as “probably the greatest innovation of 21st-century fashion,” the ability to transfer digital prints directly onto fabric was leapt on by brands from Prada to Pucci and Jil Sander to Dolce & Gabbana at the beginning of this decade, while in London, a whole generation of young designers such as Mary Katrantzou and Peter Pilotto made their names off the back of it.

And they haven’t stopped there. “As digital prints have become ever more prevalent and emulated, designers need to continue to push the boundaries,” explains Natalie Kingham, buying director of Matchesfashion.com.

“This means that we continue to see a huge amount of creativity from those who have become synonymous with print. Katrantzou is a great example of a designer who continues to evolve her style, from kaleidoscopic digital prints through to her intricate needlework. Peter Pilotto is another brand that has pushed the boundaries of digital printing, harnessing both digital technology and traditional craftsmanship to create collections that delight our customers season after season.”

Alongside digital printing emerged laser cutting, a method now used by countless brands across a spectrum of price points to up the intricacy ante. Take Alexander McQueen, a house famous for its complex approach. In any one collection, you may now find anything from laser-cut shoes to laser-cut leather and laser-worked dresses, bags, blouses and gowns. At Marchesa, where eveningwear is the stock in trade, dresses fashioned from gossamer layers of laser-cut lace heralded a new era of precision-cut detail for the label. 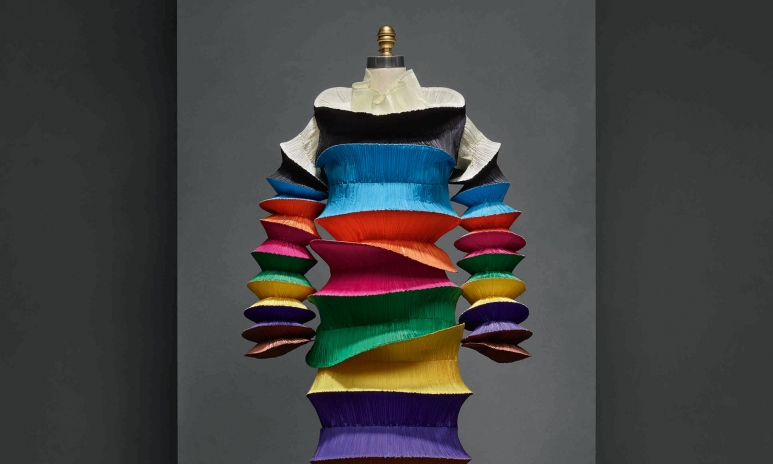 “We see designers continually pushing the boundaries,” Kingham says of these sorts of brands. “There are some who are merging artisanal techniques with modern printing, combining interesting surface textures such as layers of lace, brocades, embellishment and beading work over the top of prints. Valentino, Peter Pilotto and Erdem are a few key designers who have embraced this. There is an almost couture-like feeling in their collections, which appeal to a customer who is increasingly interested in artisanal techniques and the design process when she invests in beautiful items.”

For some consumers, however, it’s not strictly beauty but something different that strikes a chord—and for those, technology is also delivering in spades. These days, should you care to make a statement on the red carpet, you could take the Katy Perry or Lupita Nyong’o route, opting to quite literally outshine your rivals in an LED-adorned dress. At the Star Wars: The Force Awakens premiere last December, Nyong’o wore the final look from Zac Posen’s spring/summer 2016 show, a dress adorned with 500 LEDs.

Similarly, Katy Perry’s showstopping gown for the 2010 Met Ball was a lit-up affair featuring 3,000 colour-changing LEDs, this time made by London’s Cute Circuit, a self-styled techno atelier dedicated to wearable technology covering everything from light-adorned dresses to interactive designs on which you can feature your own tweets. Not one to be left behind when it comes to innovation, Hussein Chalayan has also been pushing the boundaries, delivering for SS16 his “transforming dresses.” As his final models hit the runway, his soluble designs disappeared in a shower of water to reveal entirely different gowns underneath.

For some designers, using technology to construct more intricate versions of what came before isn’t enough. Instead, they are seeking to transform our idea of what fashion actually looks like, forging a whole new aesthetic world as they go. It’s certainly the case for Iris van Herpen, the Dutch designer and “3D couturier” generally considered to be at the forefront of all this, with several looks featured in the Met’s coming exhibition. “I always mix traditional craftsmanship and new technologies so that I can go far beyond the possibilities of using just one medium,” she explains. “The huge amount of detail that is in the dresses we make here is only possible because of this. By combining the best of all worlds, I have created an atelier that pushes the boundaries of what a garment can be—and pushes the idea of what fashion can be.” 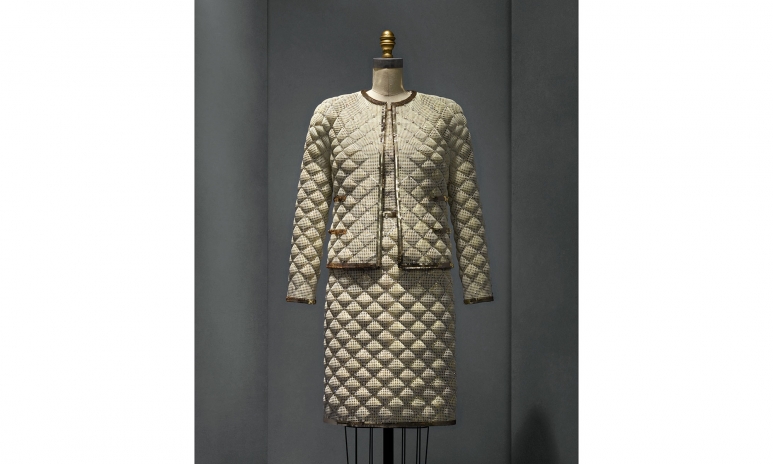 What that looks like is quite simply extraordinary. Van Herpen’s creations can come 3D-printed or crafted out of “hand-grown” fabrics moulded from magnets; they require hours of hand-stitching and silicone moulding, creating feather-strewn dresses and skeletal forms that are a complete departure from anything seen before. “The selection of my work that will be shown in the Metropolitan Museum shows really strongly the variation of techniques I have been developing, from traditional craft to 3D printing, laser cutting, moulding and magnetically ‘hand-grown’ structures,” the designer says. “Because technology is always evolving, I’m able to design new aesthetics each time. For my Lucid collection, we made a dress that is 3D-printed from 5,000 individual pieces, which are then all hand-stitched to a soft tulle to create maximum movement and flexibility. When you look close up at a 3D print, you see thousands of little lines. It is like looking at the process, like the life circles of a tree.”

As these advances gather pace, it’s not only the avant-garde like Van Herpen who are realising possibilities. At Chanel, in an appropriately themed “casino” collection for his most recent couture show, Karl Lagerfeld made one of the biggest gambles of his professional career by adopting that same technique of 3D printing and applying it to nothing less than Coco Chanel’s iconic skirt suit. He told reporters backstage that the idea was to “take the most iconic jacket of the 20th century and make a 21st-century version, which technically was unimaginable in the period when it was born.” He used a method called selective laser sintering, creating 3D fabrics that Lagerfeld then lined with silk, treated with sequins and finished with Chanel’s signature braiding. 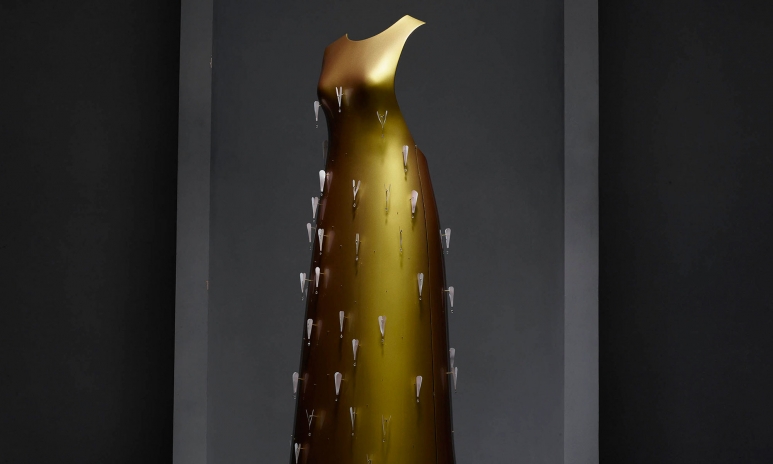 That Chanel suit will now hold pride of place in the Met’s exhibition, signifying the merging of the technological with the traditional. They may seem like funny pairings, but this is where fashion is heading—and given the powers these new techniques bring, it’s a good place to go, according to Van Herpen. “Combining craftsmanship with the latest technology is a way to optimise beauty and intricacy. To me, a 3D-printing machine or a laser cutter is the same as a needle and a thread. They are all tools in my toolbox.”

As Lagerfeld so succinctly put it after revealing Chanel mark two to the world: “What keeps couture alive is to move with the times. If it stays like Sleeping Beauty in the woods in an ivory tower, you can forget it. The women who buy couture today are not the bourgeoisie of the past; they are young, modern women.” It is perhaps entirely fitting, then, that the fashion they are being offered is made now in the most modern of ways.

Manus x Machina: Fashion in an Age of Technology, May 5 to August 14, Metropolitan Museum of Art, New York