Iris Apfel: The Story Behind The Style Icon

By Chloe Street June 29, 2017
The story of Iris Apfel is as kaleidoscopic as her famous wardrobe 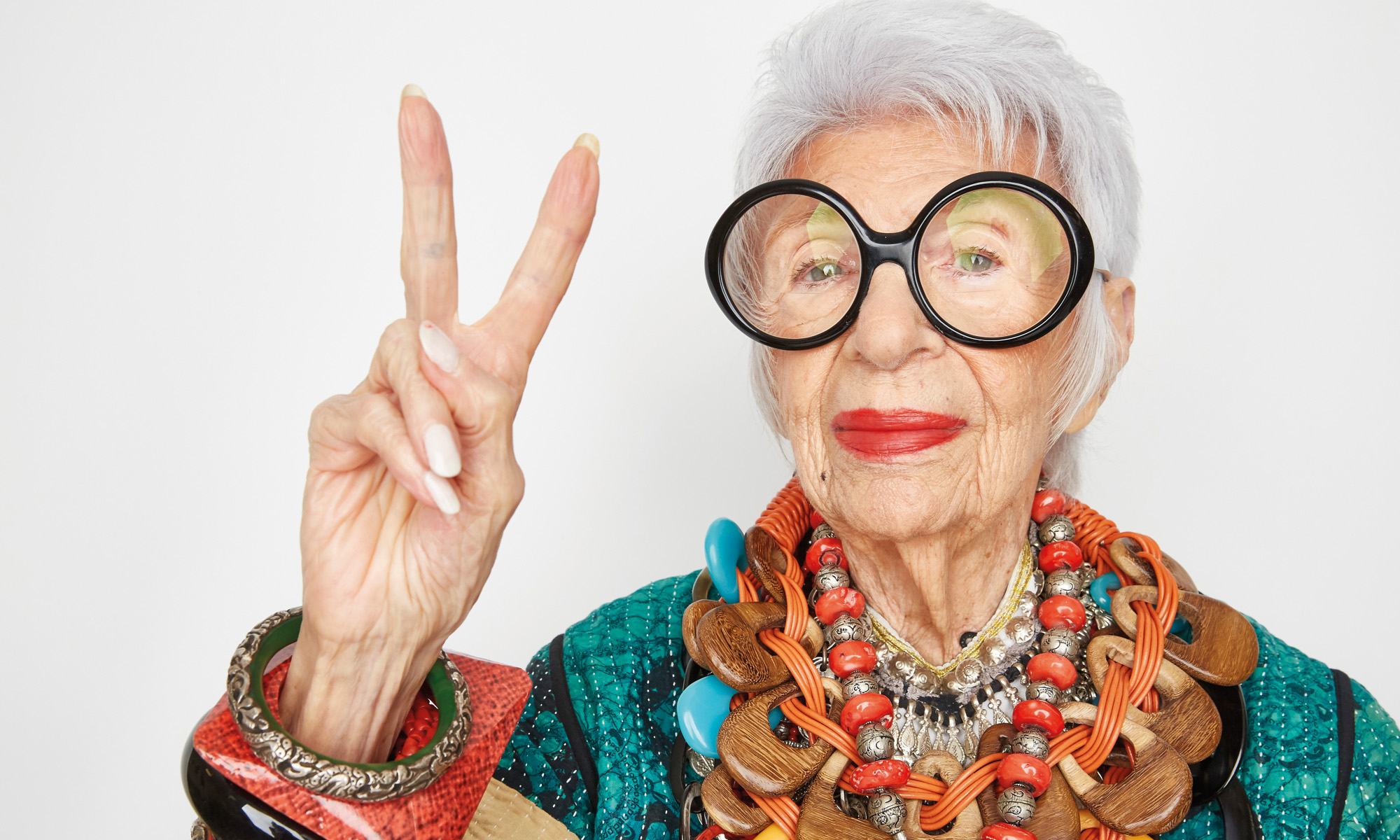 Iris Apfel: The Story Behind The Style Icon

“I think the worst fashion faux pas people make is looking in the mirror and seeing somebody else, or seeing something that isn’t there. I try to be truthful and honest,” says 95-year-old New Yorker Iris Apfel. “You have to play around with an outfit; it’s like doing a painting.”

Perched like a technicolour peacock on the sofa of a suite at the Landmark Mandarin Oriental, Iris, whose long flight to Hong Kong has induced a bad bout of sciatica, is excited about her first visit to Asia.

See also: Iris Apfel On The Power Of Good Accessories

“It took me 95 years and 30 hours to get here,” she quips, ever ebullient. She’s wearing vintage red satin Salvatore Ferragamo slippers, a multicoloured patchwork jacket she picked up in Afghanistan, and what she wryly describes as her “itty bitty mini beads,” vast metal spheres jangling about her neck. Simply being in Iris’s presence is fun. 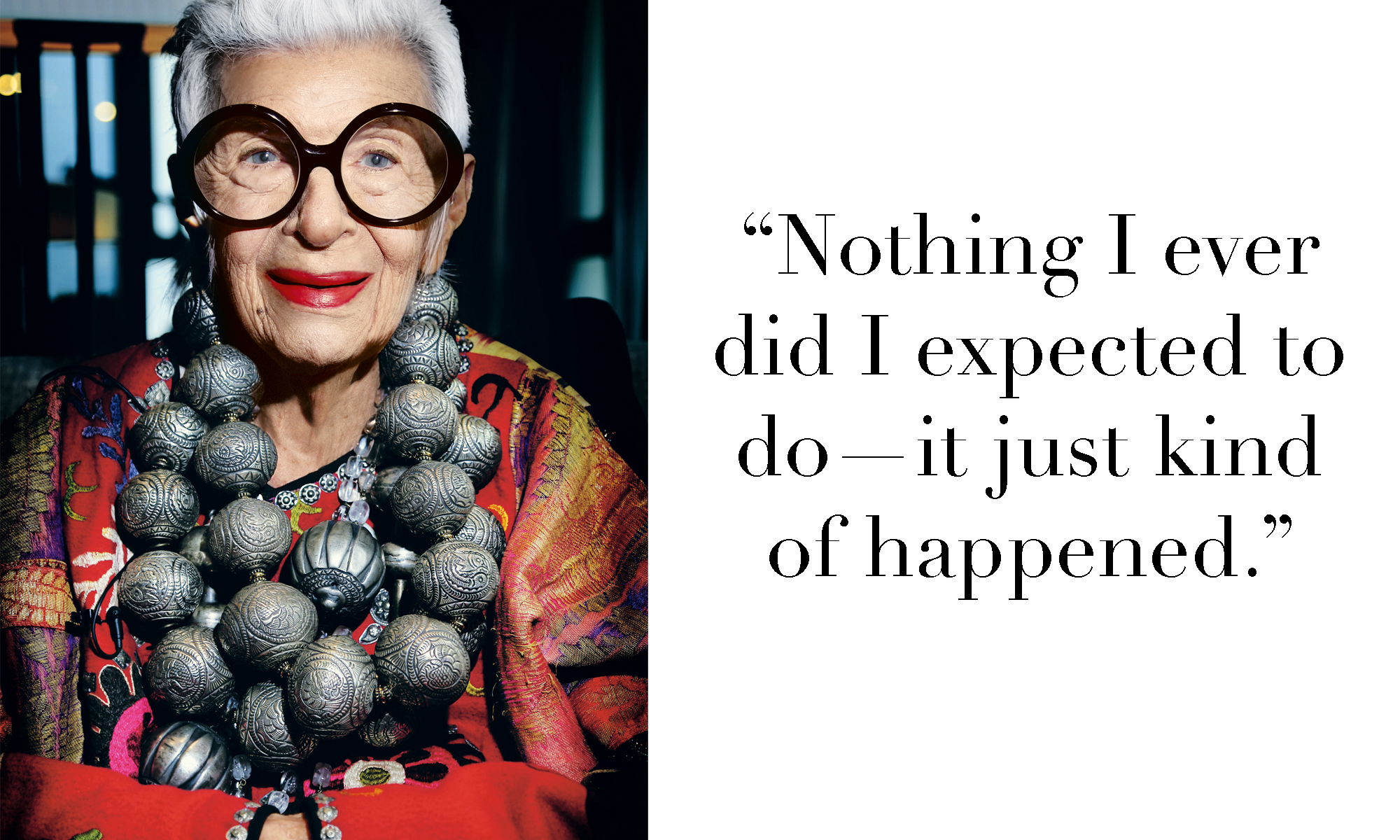 Today’s ensemble is just one of the thousands of idiosyncratic get-ups for which the slightly built nonagenarian is revered. A bona fide fashion luminary and avid collector, Iris has spent a lifetime amassing a vast and enviable collection of costume jewellery and clothing from all over the world—so vast, in fact, that she requires multiple apartments and warehouses to store it all and has donated hoards for auctions and to museums.

Her uniquely fabulous “more is more” approach to dressing sits in refreshing contrast to the mantras of minimalism largely propounded by the style set. Extraordinary vintage and couture finds are paired with tribal clothing and thrift-store bargains, then piled with enough costume jewellery to sink a small ship, creating outfits better described as art than apparel. The cherry on top of each sartorial smorgasbord is, of course, always a pair of Iris’s signature black oversized spectacles.

And yet, despite nowadays being one of the world’s most famous-—and thanks to said specs, instantly recognisable-—fashion influencers, until well into her 80s Iris was an unknown. It was not until September 2005, when the Costume Institute at the Metropolitan Museum of Art in New York dedicated an exhibition to her collection, that she came to wide attention.

Entitled Rara Avis [Rare Bird], the exhibition catapulted her into the public limelight and the fashion industry’s consciousness. A flurry of press and attention followed the smash-hit show. Who is the owner of this mad and magical collection, people wondered?

“Nothing I ever did I expected to do,” says Iris in one of the opening scenes of Albert Maysles’ 2014 biopic Iris. “It just kind of happened.” An Art History graduate of New York University, Iris worked for Women’s Wear Daily and for interior designer Elinor Johnson before setting up on her own as an interior designer. 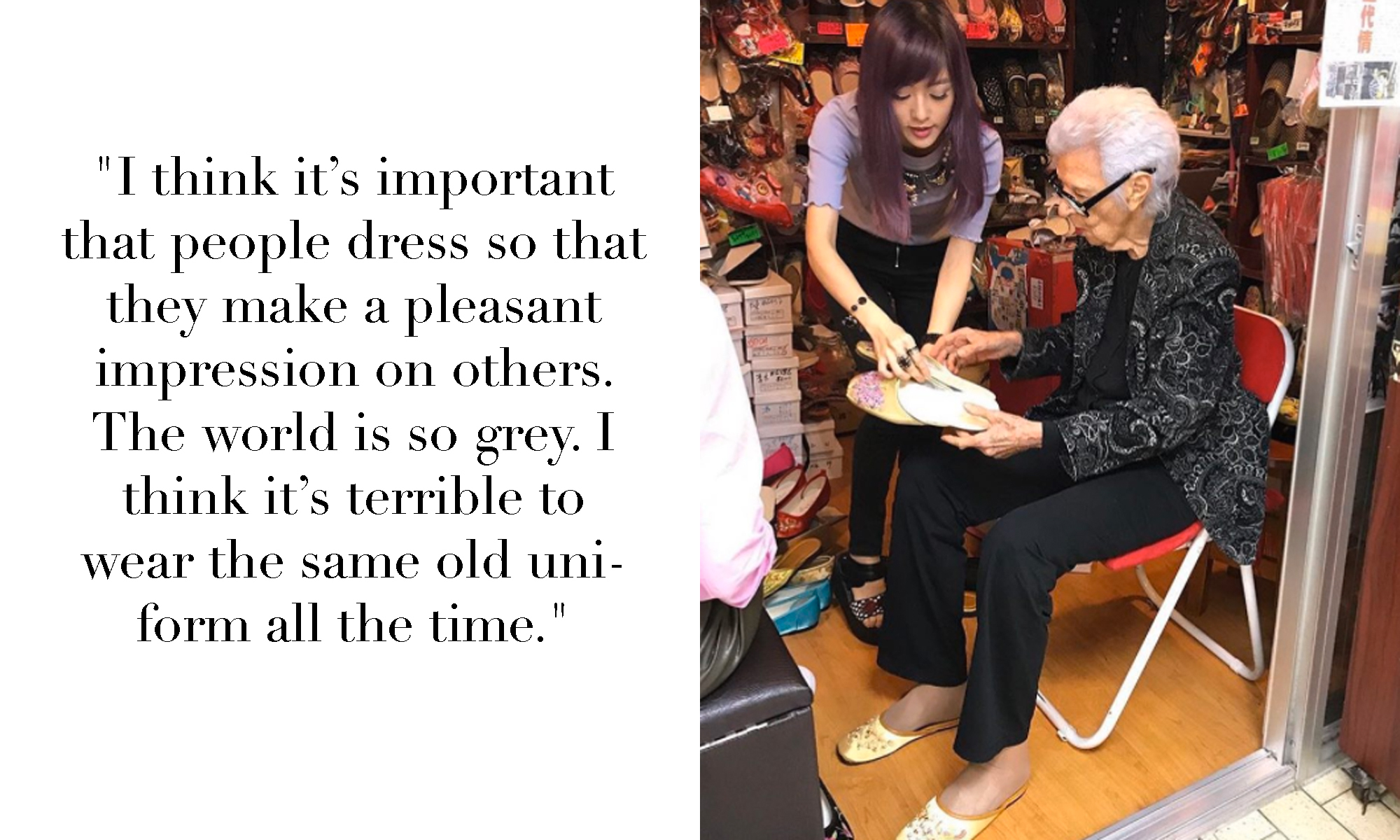 In 1948, she married Carl Apfel (“He was cool, he was cuddly, and he cooked Chinese, so I couldn’t do any better,” she remembers in the film), and two years later the couple founded Old World Weavers, a company specialising in the recreation of fabrics from the 17th, 18th and 19th centuries. In search of aesthetic inspiration for her cloth designs, she and Carl, who died in 2015 at the age of 100, travelled the world—from the souks and bazaars of North Africa and the Middle East to the flea markets of Europe.

As the pair amassed unique cloths and curios to install in the houses of their society clients back in the US—from Estée Lauder to Greta Garbo—so, too, Iris accumulated a treasure trove of trappings and trimmings from every corner of the globe. 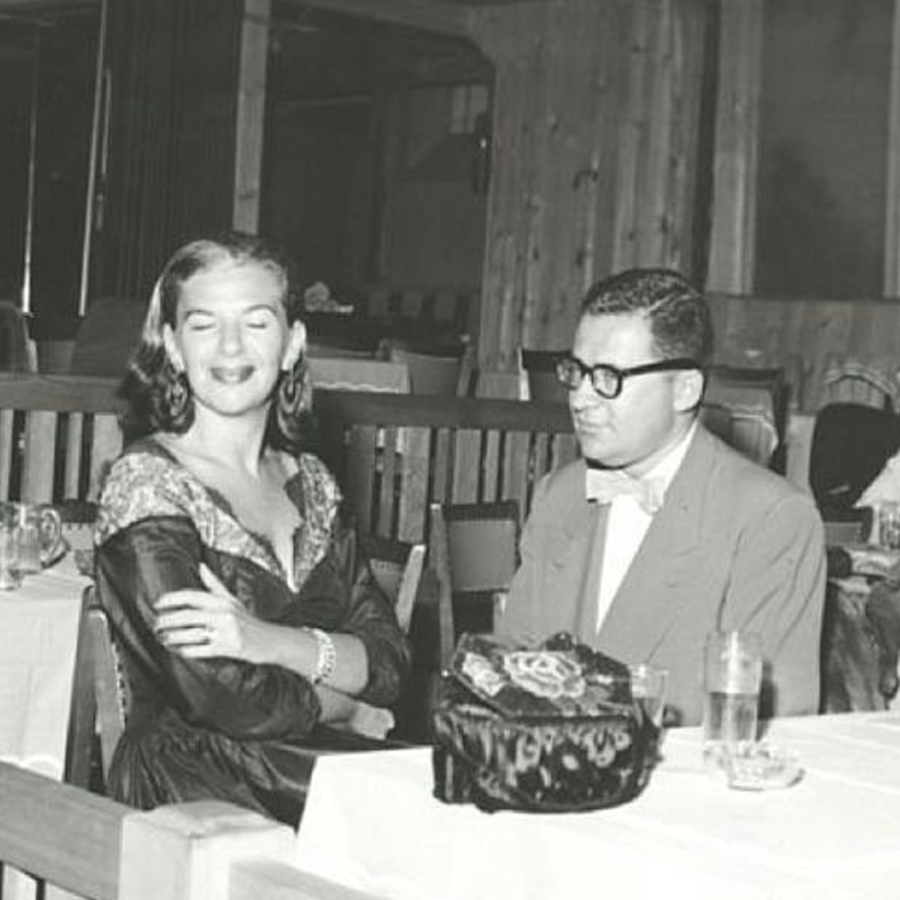 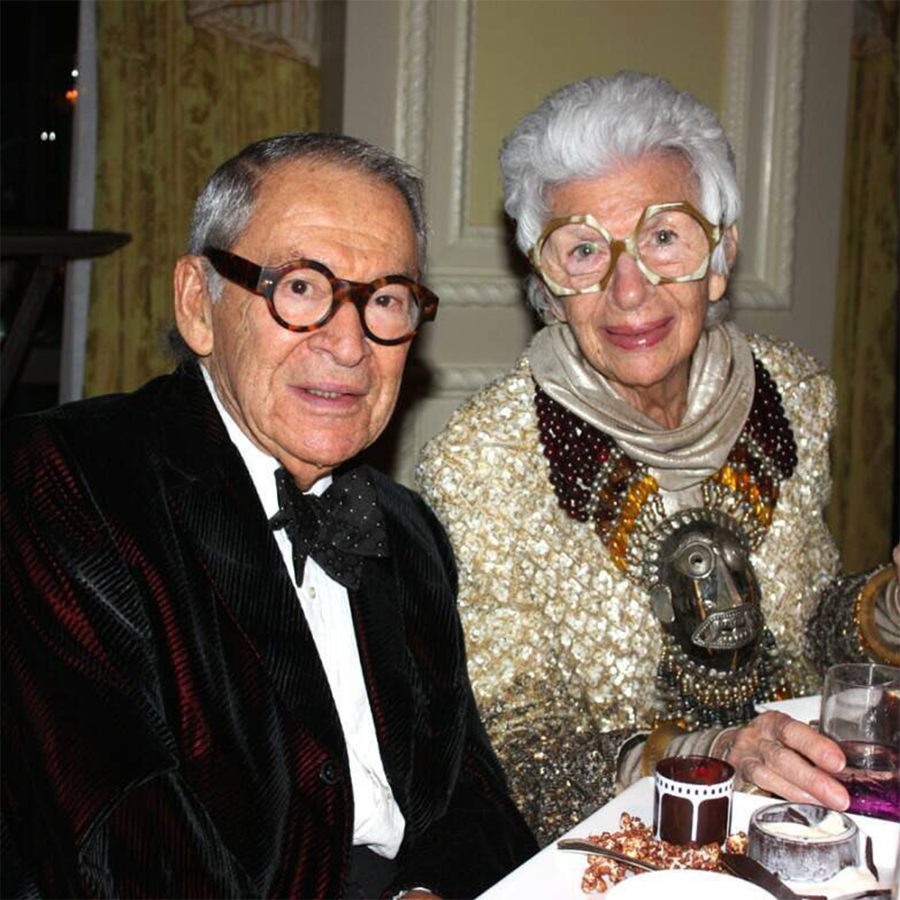 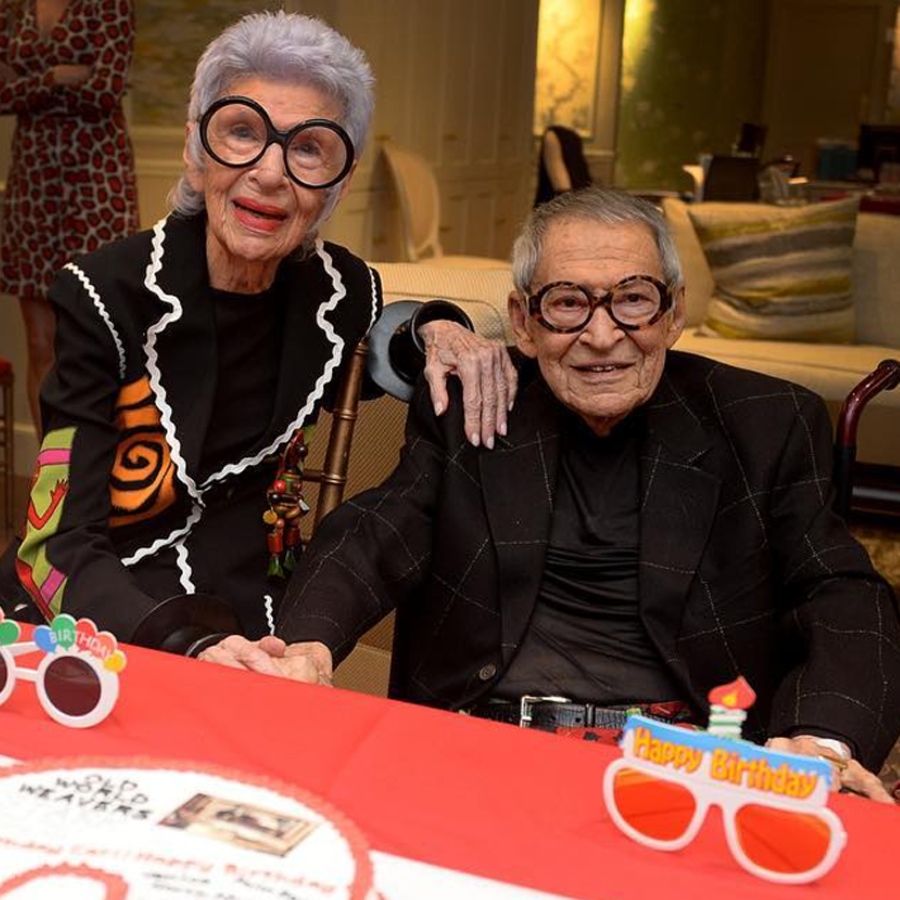 The outfits she sported to the society parties of her clients back home seamlessly wedded price points, ethnicities and genres—a Chinese shaman’s jacket might be paired with a feather boa and couture Chanel costume jewellery or an 18th-century French monk’s cassock belted and worn over a vintage couture blouse.

“There are no rules or regulations,” she says. “It’s instinct and gut feeling. I don’t do these things intellectually; if you do, they’re always very stiff. I don’t have rules because I’d only break them.”

Unusually unfazed by societal norms and the opinions of others, Iris cleverly flips the mirror on those passing judgement. “When I used to wear things that were a bit offbeat,” she recalls (“bit,” one imagines to be an understatement), “people used to always say, ‘Oh, my goodness! Don’t you worry about what people will think?’ and I would say, ‘No, I don’t care at all.’ That’s not my problem. I dress for myself and I hope other people will like it, but if they don’t, it’s their problem, not mine.” 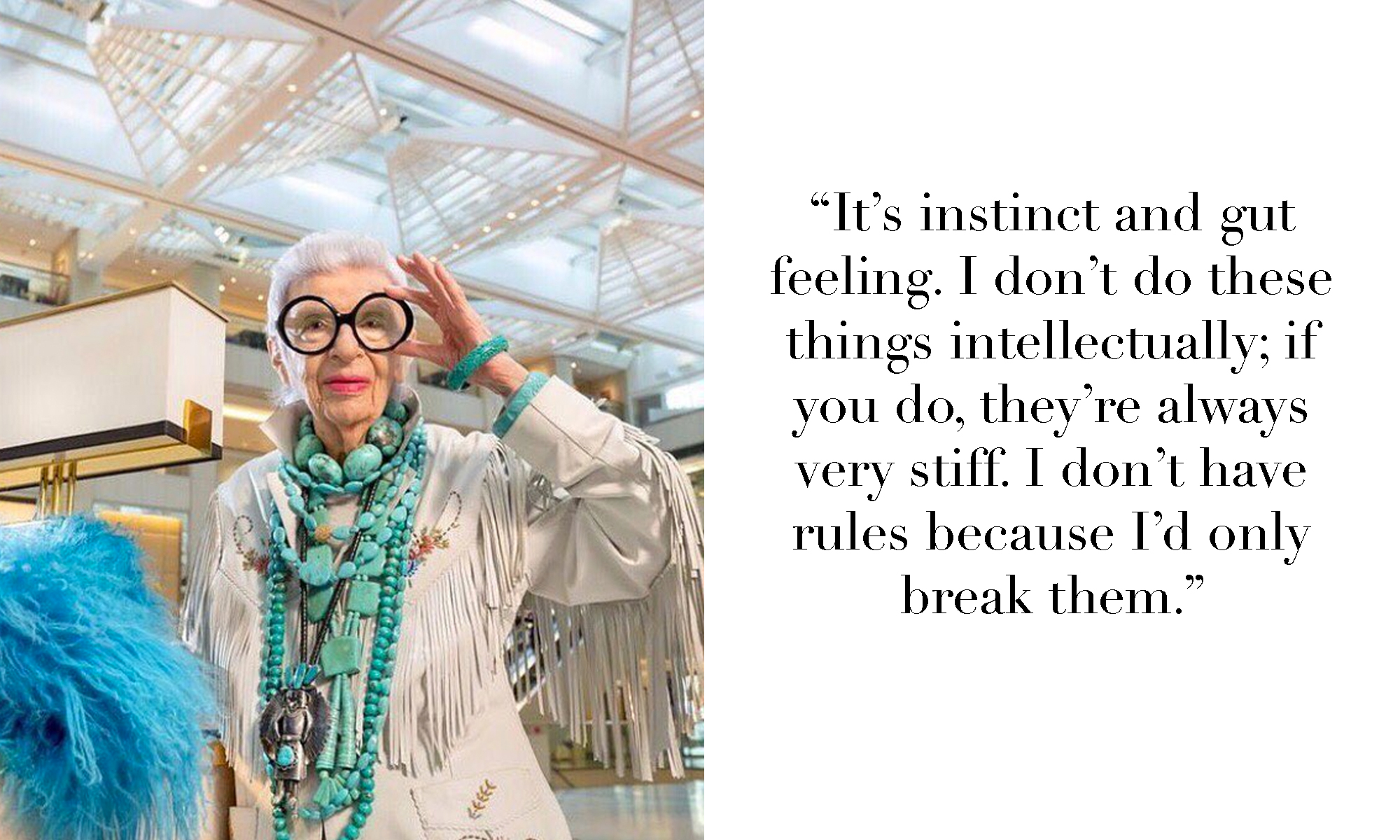 Aside from herself, there were two people whose opinion Iris valued: her husband’s and her mother’s. “If Carl didn’t like something, I wouldn’t wear it. But otherwise, I dress for myself. I like to be comfortable, I like to be chic and I like to be amusing. I think it’s important that people dress so that they make a pleasant impression on others. The world is so grey. I think it’s terrible to wear the same old uniform all the time.”

Did Carl object often? “Very rarely,” says Iris. “He liked my taste and I used to have a wonderful time dressing him. He loved clothes and he wore them very well. He wasn’t afraid of being a little bit different. I mean, we don’t like to be freaky or rebels, but I think there should be individual touches in the way one puts oneself together.” 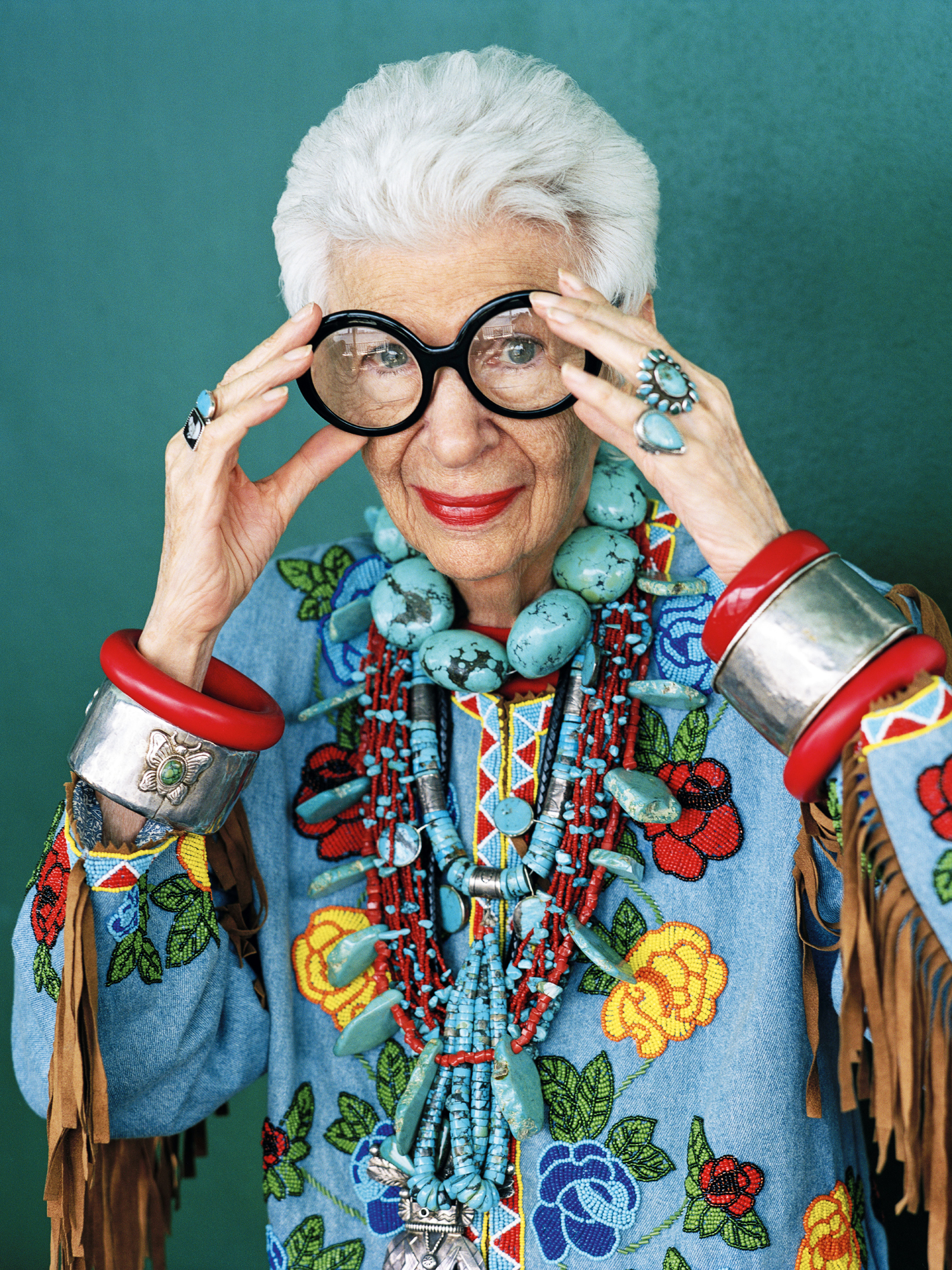 Photo: Courtesy of The Landmark

Achieving quick success, Old World Weavers was asked to work on restoration projects at the White House for nine different administrations. In the documentary, Carl lets slip that working with Jackie Kennedy was troublesome and is swiftly reprimanded by his wife (“We’re not supposed to talk about the White House, Carl”).

Did any of the first ladies have style, I ask? “Most of them didn’t. The lady that we worked with most closely was Pat Nixon. Not that she had any great style, but she was very passionate about ensuring the White House was made as beautiful as possible. Jackie Kennedy was very well dressed,” she continues, “and Mrs Bush always looks very appropriate. I think our current First Lady is well dressed and very beautiful, but I don’t think there are too many first ladies of enormous style.”

She is similarly lukewarm on the topic of modern-day celebrities. “They all have stylists who put them together, which is a bit sad. I think more people should express themselves. It would be more interesting for them and for everybody else. Dressing can be a creative experience and I think people should take advantage of it.”

In Iris’s mind, people ought to be “aware of what’s going on in the world and interpret it, and not follow slavishly and do the same old, same old. We need more creativity, more originality and more whimsy. I think it’s the young people’s job to seek that out.” 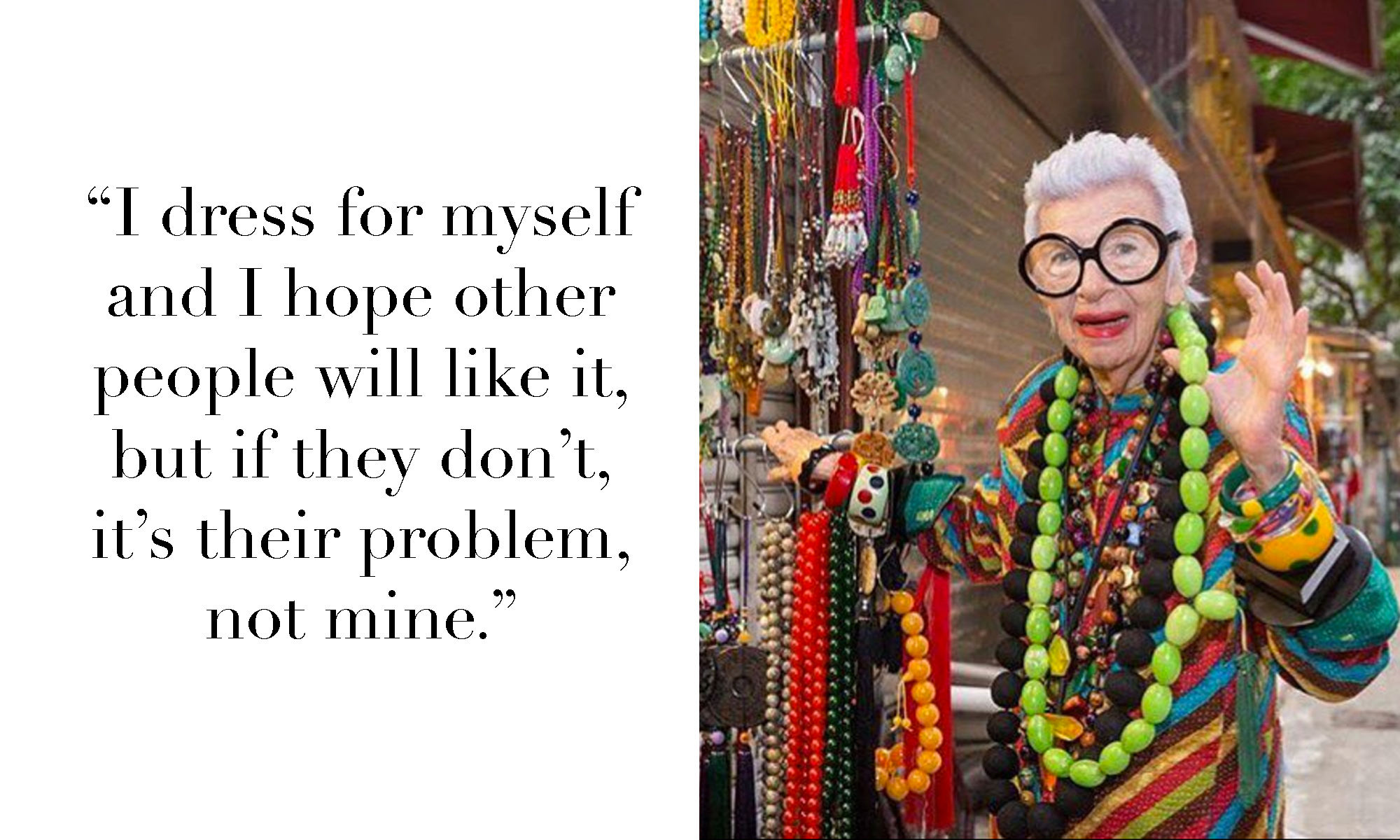 When it comes to dressing one’s age, the nonagenarian is very pragmatic and believes you “don’t have to wear a sackcloth and ashes, but when you’re older there are certain things you should not do.” Her list of taboos for the older woman includes miniskirts (“70-year-old knees are not pretty”), strapless evening gowns (“they look quite ridiculous. No matter how much of a jock you are, your arms get more flabby as you age”), long hair and heavy make-up.

“I think trying very hard to look years younger than you are is silly and makes you look older,” she says. “Every age can have its own kind of beauty. When you’re young, you can take more chances and show off your body. But as you age, you can’t fight gravity. You can get a facelift if you like but if you’re 80 years old, nobody is going to think you’re 32. It just looks silly. It’s ridiculous vanity.” 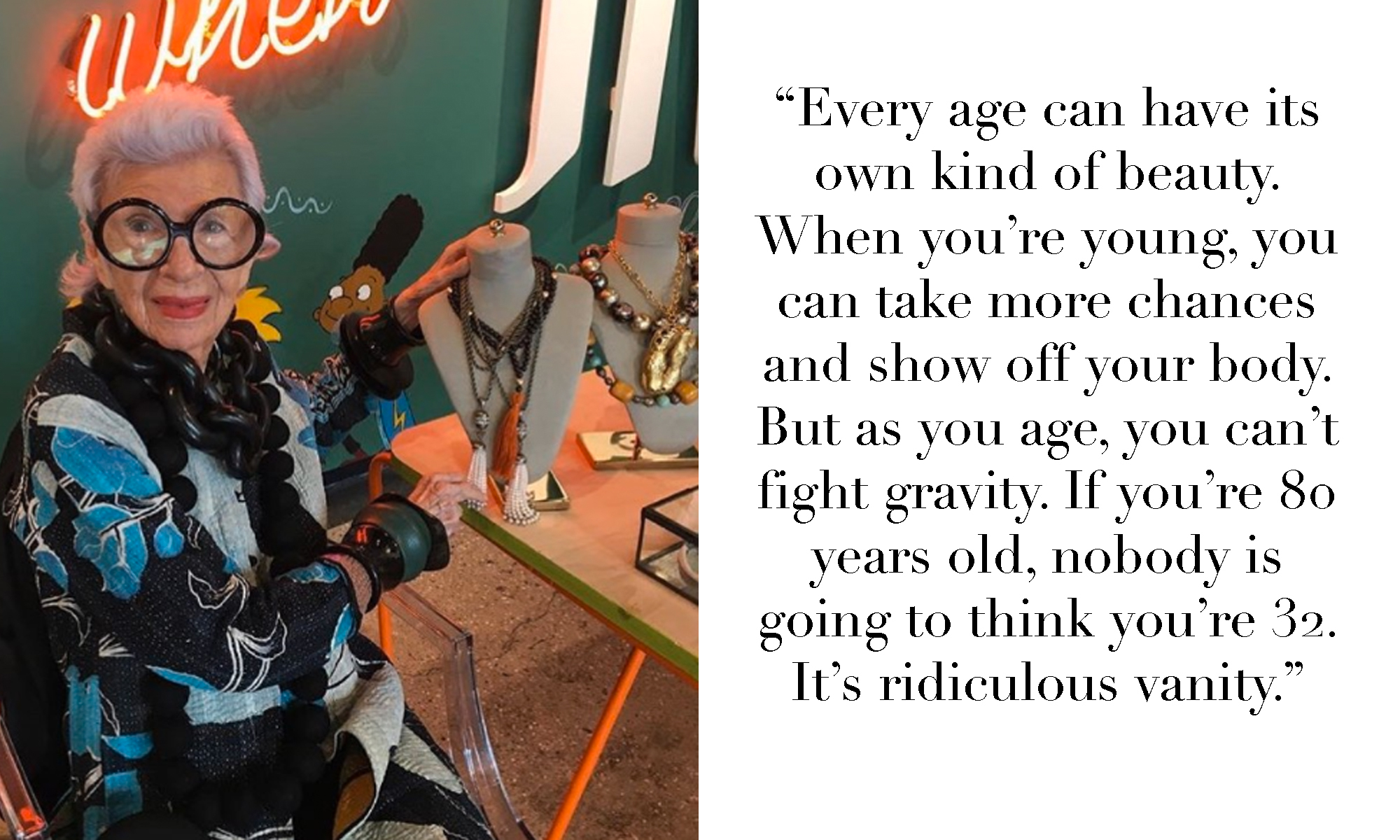 For her, style is “attitude, attitude, attitude,” and owning the right attire is of secondary importance. “Some of the most stylish people I know didn’t have any money and didn’t have any nice clothes; they just had an attitude and a way of carrying themselves that made them look stupendous. That’s something that you have to do for yourself. Fashion you can buy, but style you must possess. It’s in your DNA.”

Those who would like to attempt a shortcut, however, can purchase a dash of Apfel’s panache via the range of accessories and ready-to-wear, Rara Avis, she launched on the Home Shopping Network in 2011 and still sells today. She also launched a clothing line with Macy’s in 2016 and is in Hong Kong to launch an Iris-inspired range of accessories in partnership with Landmark—from bangles to necklaces and of course pairs of Iris-inspired specs.

During her time in Hong Kong, Iris charmed audiences at two special panel discussions. The first was a public forum held in the Landmark Atrium, with chair Divia Harilela and panellists Michelle Ong, co-founder of Carnet jewellery, and fashion designer Masha Ma. The panel discussed with Iris their views on originality, attitude and expressions of style, and finding fulfilment through creativity.

See also: How To Pick The Perfect Pair Of Glasses

The second was a private forum held in association with the Fashion Farm Foundation in which Iris passed on her words of wisdom on charting a road to self-discovery through style to a group of the city’s young, up-and-coming fashion designers—“I always enjoy working with the young designers and I hope I can help them in some way,” says Iris. 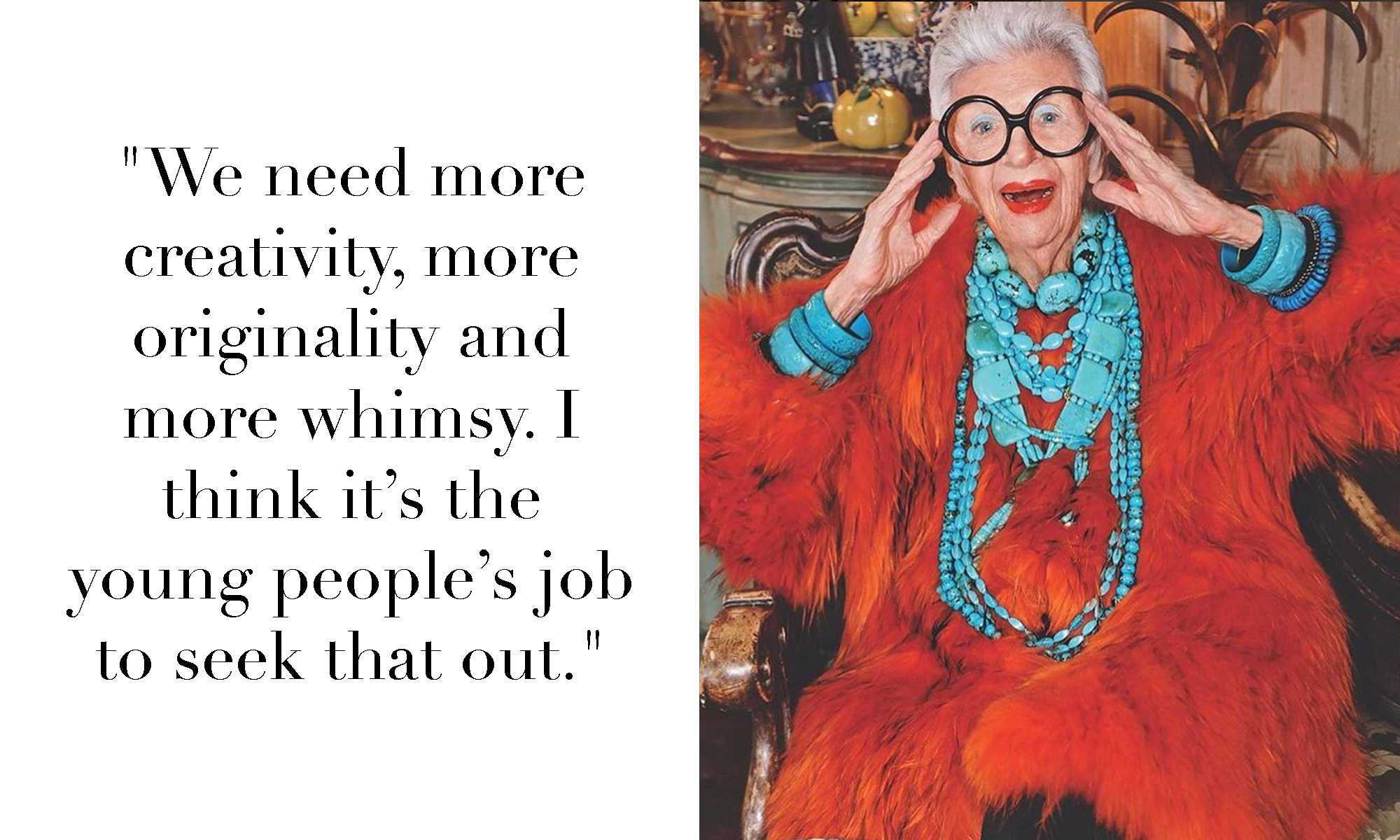 While in town she also made sure to stop off at a few of the city’s most interesting markets and shops—from checking out the jade and antiques on Cat Street to trying on specs at the Landmark. “Hong Kong is busy, bustling and it’s very exciting,” says Iris.

In addition to lending her aesthetic eye to design, Iris has also been in demand in front of the camera. She’s modelled for New York fashion house Kate Spade, accessories designer Alexis Bittar, and cosmetics behemoth Mac. She graced the November 2012 cover of Dazed and Confused magazine wearing a Tweety Pie-esque Rei Kawakubo creation at the age of 91. It seems everyone wants a slice of her enviable brand of nonconformity. 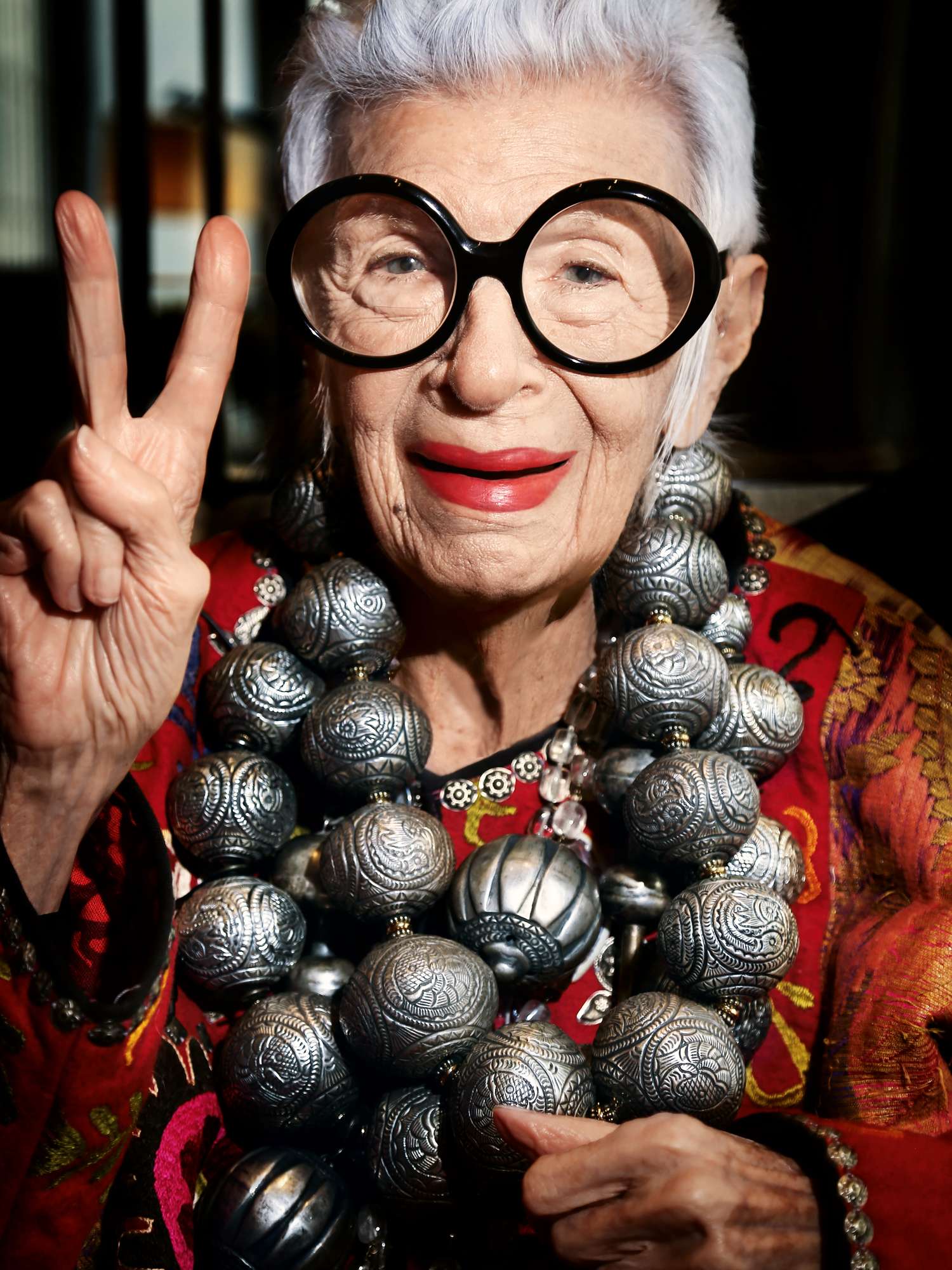 Iris stands for fearlessness and fun in equal measure, a compelling combination. Her colourful and enthusiastic approach to living and dressing coupled with her acerbic wit and vitality make her an understandably lovable and inspirational public figure.

In the documentary, one of her staff members reveals that her phone will ring “sometimes 50 times a day” with requests for interviews, modelling and collaborations. But does the “geriatric starlet,” as she refers to herself, enjoy all the attention? “Oh, sure. I’m the oldest living broad who’s ever graced a cover. I mean, how many 95-year-old cover girls do you know?”

VIDEO: In celebration of Hong Kong Tatler's 40th anniversary, Apfel goes through some of the wackiest outfits from our archives.