He's one of the most powerful men in Italian fashion, we speak to the entrepeneur who built the Tod's brand and discover the source of his Midas touch 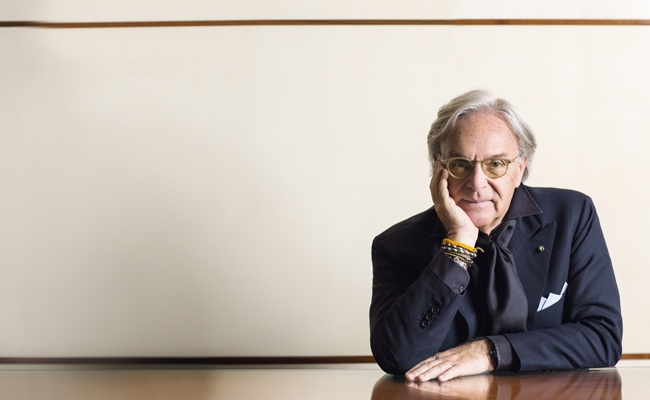 The headquarters of tod’s are as sleek as they come. The all-white office block and factory gleam among the rolling hills of central Italy, more reminiscent of a successful Silicon Valley start-up than a European luxury leather goods label. Inside the Le Marche-based building, bright sunshine floods through glass walls and a vast, royal-blue oil painting of the famous Gommino shoe is the only flash of colour in an otherwise uniformly white interior. Beautiful men and women in crisp shirts, jeans and loafers (Tod’s, of course) chat and flirt by the Ron Arad-designed stainless steel staircase. The complex radiates a sense of money and power—and that elusive Italian glamour the rest of us try so hard to recreate.

At the centre of all this modern European chicness is Diego Della Valle. The shrewd 61-year-old billionaire was born into a family of cobblers in Casette d’Ete, a small town a few kilometres away. His father, Dorino Della Valle, made shoes there, many of which were shipped to Saks Fifth Avenue. When Diego turned 16, he accompanied his father on a business trip to the US. “As soon as I got to New York, I noticed the Americans had a very different approach to clothing,” says Diego Della Valle in his thick Italian accent. “In Italy in those days, men and women dressed up on the weekend—especially on Sundays, when we were hot and uncomfortable in jackets and ties and lace-up shoes. But in America, they were so relaxed, although sadly their weekend clothes were not so nice to look at. So I thought, ‘Let’s make shoes for them that are casual, but also well made and stylish.’”

At 16, Della Valle was too young to be taken seriously, so he went to Bologna to study law. By the time he was 22, he had persuaded his father to join him in launching JP Tod’s, a name he plucked from thin air for sounding American and being easy to pronounce. His concept was simple: the Gommino (named for the 133 pebbles, gommini in Italian, on the sole), a driving shoe crafted for comfort as well as style and offered in a range of colours. Della Valle then used vintage images of Cary Grant and Audrey Hepburn in his advertisements to imply the brand had been around for decades.

“Before, shoes were very stiff, so then we thought to make them more like gloves—light, soft, comfortable and useful but still lovely to look at,” he says. “Something you wear all day and there is no pain.” Within a year, Gommino loafers were selling well in the US, Italy, France and England, and the Italian luxury goods industry had a hot new competitor on the block. 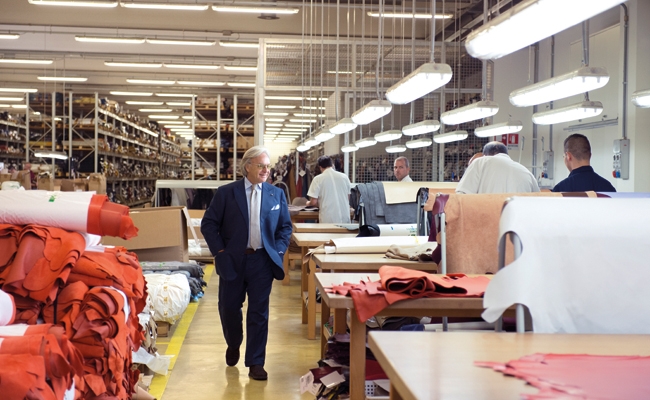 Setting yourself up as an entrepreneur is somewhat commonplace today, but in the Italy of 1978, it showed an astonishing amount of ambition. Nearly 40 years later, Diego Della Valle is still a fascinating—and rather eccentric—man. His quirkiness is on full view the day I meet him, thanks to an armful of brightly coloured bracelets under the sleeve of his immaculate blue suit. “They all have a story,” he says, pushing the sleeve up for my benefit. “One is the colours of Italy, the other is a present from my son, another was bought in Africa. My board would probably like me to take them off, but I don’t want to be a boring old man.”

Boring is a characteristic the Tod’s president and CEO is not in danger of displaying any time soon. In Casette d’Ete, Della Valle lives in an 11-bedroom former monastery. Following the theme, his villa on Capri, Torre Materita, is a castle and tower erected in the 1500s by Carthusian monks. He also has homes in Rome, Milan, Paris, New York and Miami; his yacht, The Marlin, is a 15-metre beauty that belonged to John F Kennedy and was bought by Della Valle in 1998 while staying with Ralph Lauren. “Maybe it was fate, because Ralph lived just near where the yacht was,” says Della Valle, smiling at the memory. “So I went over, made an offer and came back to have lunch. During dessert, the telephone rings. Ralph comes back to the table and says, ‘I don’t understand. When did you have time to buy a boat?’”

That anecdote alone illustrates just how perfectly Della Valle embodies the American Dream—but despite his love of the US, he remains the most patriotic Italian I have ever met. He rescued Italy’s Fiorentina soccer team from bankruptcy; he spent ¤25 million restoring the Colosseum; he’s an investor in the Rome film studio Cinecittà; he’s a member of the La Scala Foundation, which supports Milan’s opera house; and he’s working on a new high-speed train to run between Milan and Rome. “Italy is a very special country and I think I can say that without bias,” he says. “There are a lot of problems here, true, but it’s also the most unique and most wonderful place on Earth. If you look at the history, the culture, the food, the wine, the countryside and the architecture here, you soon realise there is nowhere else like it. And I’ve been saying it for years—Italian art and culture are the most important resources we have to relaunch our economy. So people like me, people with some money, we have a duty to preserve them.”

The badge “Made in Italy” is central to the Tod’s image. To ensure every shoe, bag and item of clothing is of the highest possible quality, Della Valle insists they are manufactured in this gleaming white emporium overlooking the Adriatic Sea. As we wander through the rows of bustling workers, I can see that the shoes are still hand-stitched by smiling Italian women, who cover their fingers in thick bandages and gossip with one another as they work. The brightly coloured pieces of suede are then passed to the men, who nail the soles in place and iron them into shape.